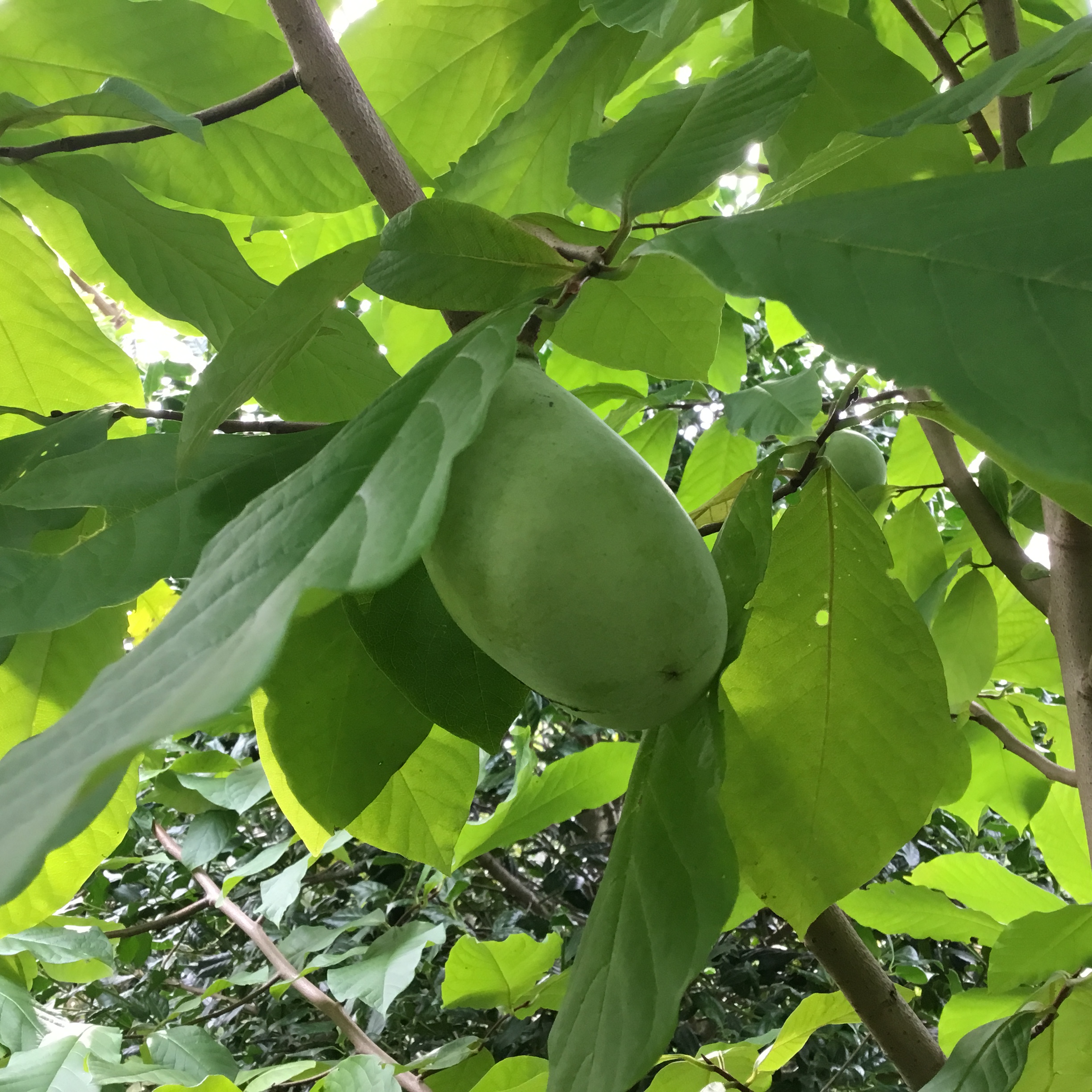 Locations: Like many of us, I was first introduced to the pawpaw tree as a child by the traditional, earworm-worthy “Pawpaw Song.” Years later, I became intrigued about this mysterious species and its fabled fruit but had never seen one until recently, when I visited James Marshall and Adam Bundy’s garden with its two handsome pawpaws. A few days later, I met Ken DiPaola, who showed off his fourteen trees. If anyone else grows them, let me know.

Tree stats: The native pawpaw is the northernmost member of the tropical custard apple family, which includes soursop,  sweetsop, and cherimoya. In its natural range from southern Ontario to northern Florida and west to Kansas, the deciduous pawpaw favors rich, lowland areas near rivers where it grows from 15 to 30 feet tall. Like sassafras, pawpaw trees can form clonal colonies. They’re distinguished by luxurious, foot-long leaves and unusual purple flowers pollinated by flies and beetles (or humans) that morph into large, nutritious fruits that ripen in late summer or early fall. Mr. DiPaola describes the raw fruit as a “divine cross between a mango and a banana with the texture of avocado.” Mr. Marshal and Mr. Bundy pronounce the flavor “a rich medley of mango, papaya, melon, and banana with a custard-like papaya consistency.” The fruit can be used as an ingredient in pies, custards, ice cream, and beer.

Natural history: The pawpaw was originally described by the 16th century Spanish explorer Hernando de Soto and was for a while confused with the papaya. The tree’s fruit and bark were favored by Native Americans. Thomas Jefferson sent seeds to Europe and George Washington grew trees at Mount Vernon. Pawpaw fruit sustained runaway slaves and members of the Lewis and Clark expedition when they ran out of food. The fruit was also consumed by megafauna that expanded the tree’s range northward as the ice sheets retreated. It is the only host plant for the lovely zebra swallowtail butterfly.

Pawpaw nation: Until the mid 20th century, pawpaw fruit was an annual treat in American cities and rural communities. On September 27, 1865, the Cincinnati Enquirer announced: “This luscious fruit is now in its prime and was never more abundant or of finer quality in our markets. In price it ranges from ten to twenty cents per dozen.” Unfortunately, pawpaw fruit is quite ephemeral, which may partly explain why it was supplanted by sturdier, more travel-friendly produce like apples, pears, bananas, and oranges.

Pawpaw renaissance: In 1975, plant geneticist Neal Peterson sampled his first pawpaw and was smitten. Since then, he has cultivated pawpaw varieties that boast more flavor and fewer seeds than fruit from wild stock. Other growers have also contributed named cultivars. Mr. Marshall recommends ‘NC-1’, ‘Sunflower’, ‘PA Golden’, ‘Mango’, ‘KSU Atwood’, and ‘KSU Benson’ for Shelter Island. All three gardeners pollinate their trees using fine paint brushes. Aside from full sun and the necessity of having at least two genetically different trees, pawpaws thrive in fertile, well-drained soil. For anyone interested in growing this relatively carefree tree, Mr. Marshall recommends Michael Judd’s manual For the Love of Pawpaws.