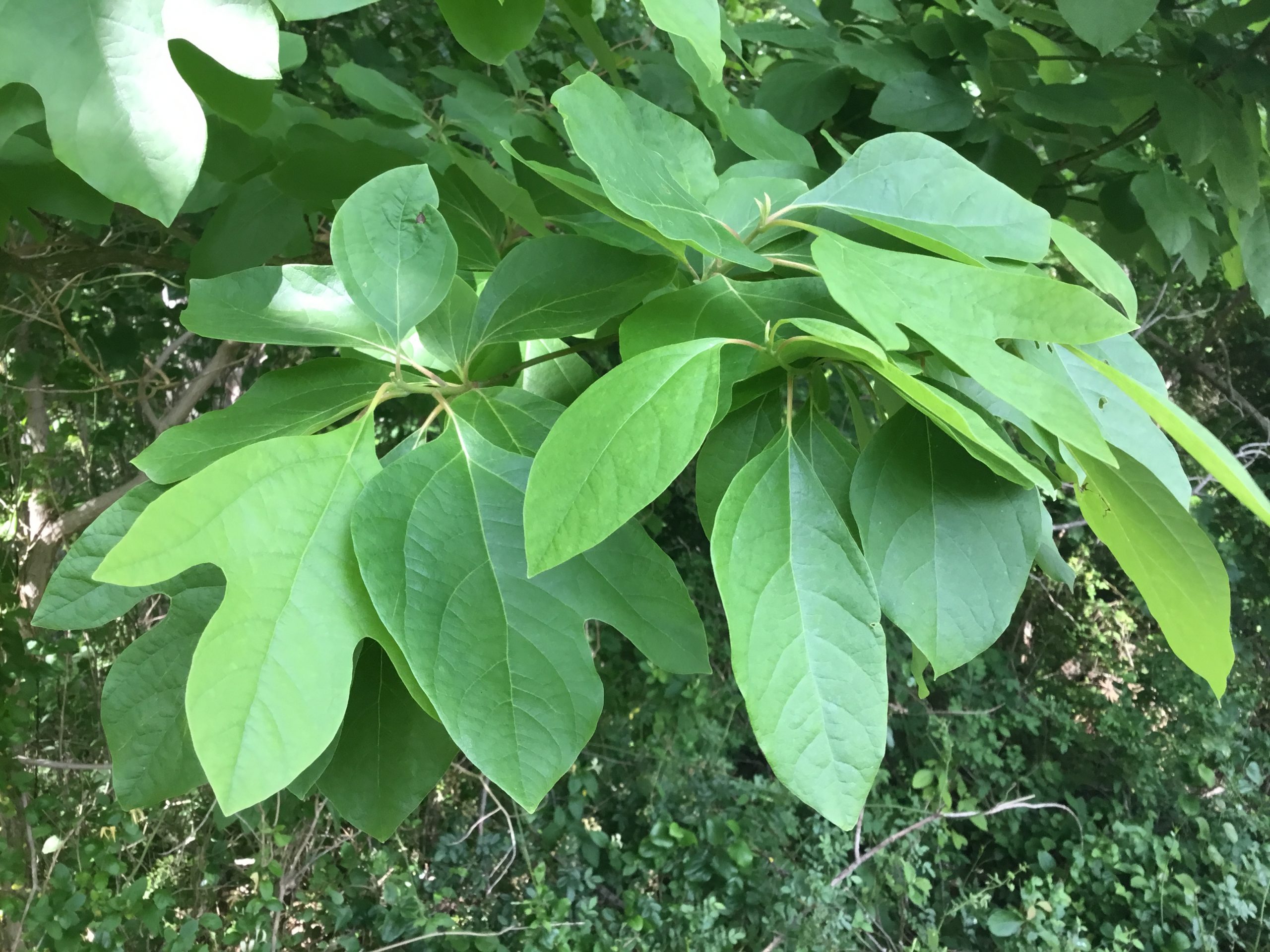 Locations: Common in Island woods and woodland edges, sassafras is easy to identify by its two-lobed (like a mitten), three-lobed, or unlobed leaves. Some trees have leaves with all three shapes. Look for individual specimens along Cobbetts Lane after passing the fire house and a prominent grove on Ram Island Road after turning left from Cobbetts.

Tree stats: Native to North America and related to avocado and cinnamon, sassafras ranges in the east from Maine to central Florida and west to Kansas and Texas. It grows up to 60 feet high and 40 feet wide. Sassafras is a clonal species, meaning it can generate new trees via its roots, potentially creating large colonies. Pollinated yellow flowers in the spring become small blue berries atop a red stalk like a golf ball on a tee. In the fall, the leaves turn kaleidoscopic shades of orange, red, and yellow. The leaves, branches, bark, and roots have an aromatic fragrance strong enough that it’s purported that Columbus smelled sassafras as he approached land.

A prized tree: Native American tribes valued different parts of sassafras to treat wounds and various illnesses. The dried and pounded leaves have long been used as a gumbo thickening agent called filé. When the Spanish, French, and British arrived in America, the tree quickly became an important export as wood for building and medicine that supposedly cured pretty much everything, including syphilis. (It didn’t.) Sassafras was one of the ingredients in the friendly-sounding Godfrey’s Cordial, an 18th century opiate given to restless infants. Unsurprisingly, a number of children didn’t survive the treatment.

Root beer pleasures: In more modern times, safrole, an oil derived from sassafras, was used to manufacture commercial root beer until 1960, when the FDA determined that the substance was a potential carcinogen. But that shouldn’t stop you from trying homemade sassafras beverages. Hank Shaw, author and self-described omnivore, offers an intriguing root beer recipe on the website Hunter Angler Gardener Cook. (He also points out that “you’d need to drink 24 gallons of sassafras root beer a day for an extended time to get the amount of safrole fed to those rats” in the FDA study.) As always, do your own research when creating wild food concoctions.

A neglected beauty: Because of its suckering habit, sassafras is rarely planted in home landscapes. Too bad, because it’s a charismatic tree for shade or sun. The trees along Cobbetts existed in vine-smothered obscurity until they were uncovered and carefully pruned and shaped by arborist and designer Kevin McCafferty, who has a special affection for the species. Landscape architect David Kamp cultivated a group of inherited sassafras on his former property by limbing them up and underplanting with various groundcovers. The effect was soft and magical.