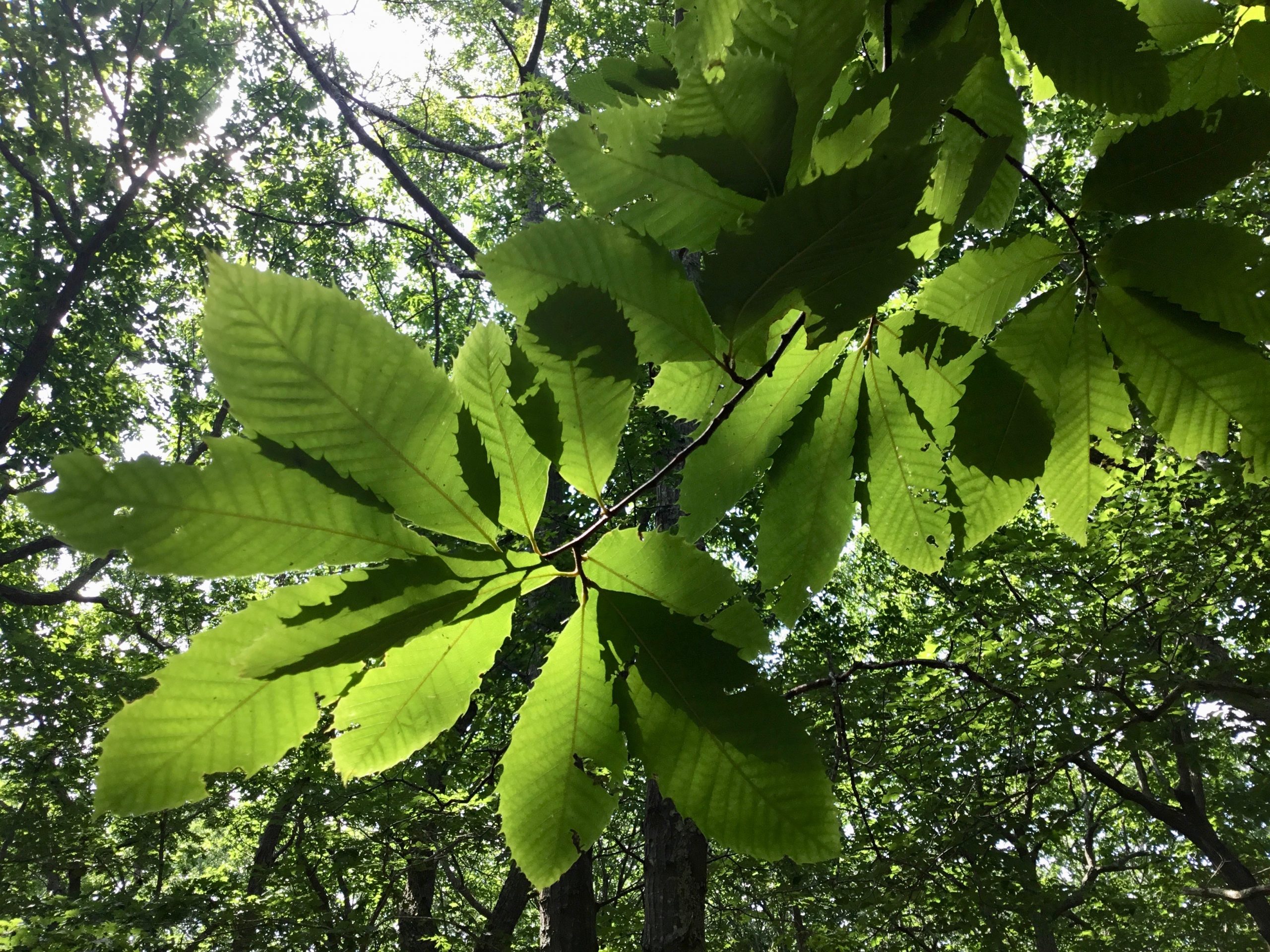 Location: One of the rarest trees on Shelter Island, two American chestnuts persist in Mashomack’s woods. (A third died several years ago.) One of the trees is adjacent to the red trail but, because it’s closely surrounded by other trees, I wouldn’t have found it without guidance from Cindy Belt, the preserve’s Education and Outreach Coordinator. (For directions, see below.) The long, toothed leaves are unmistakable. Stand underneath on a sunny day and look up and you’ll be dazzled by backlit, overlapping layers of leaves in glowing shades of green.

Tree stats: Once the monarch of eastern forests from southern Maine to Georgia and west to Mississippi and Ohio, the pre-blight American chestnut reached up to 100 feet with a canopy that could stretch 100 feet wide. In early summer, clusters of fragrant flowers spring from the branches like fireworks. Pollinated female flowers become prickly capsules containing nutritious nuts relished by bear, deer, turkey, and squirrels. In earlier times, the nuts were also valued by people, particularly in chestnut rich Appalachia, where the annual yield provided a reliable food source and cash crop as well as fattening forage for hogs. The rot-resistant wood was used for house construction, railroad ties, furniture, and instruments.

Catastrophe: In 1904, American chestnuts at what is now the Bronx Zoo were stricken by a fungus, Cryphonectria parasitica, unintentionally imported from Asia. The fungus penetrates the bark, eventually girdling and killing the tree by interrupting the flow of water and nutrients. By 1950, the chestnut blight had wiped out almost 4 billion trees. Though remaining affected trees can produce enough growth from stumps or roots to flower and produce nuts, they often succumb again. Newer trees are either destroyed by the blight before reaching maturity or are too isolated to produce fertile nuts.

Hope: For several decades, The American Chestnut Foundation (TACF) has been engaged in a program of crossbreeding the American chestnut and the blight resistant Chinese chestnut (C. mollissima). Another strategy, pursued by Dr. William Powell and Dr. Charles Maynard at SUNY College of Environmental Science & Forestry and supported by some chapters of TACF, involves inserting a blight resistant bread wheat gene into the almost 40,000 gene pairs in the chestnut genome. The blight resistant transgenic tree retains all of the American chestnut genes whereas the hybrid contains a mix of American and Chinese genes. Before the transgenic tree can be released, it will need approval from several federal agencies.  For more information, contact Allen Nichols, President, NY-TACF,  at fajknichols.75@gmail.com

Local Effort: Niko Nantsis, co-director of the Long Island district of TACF, is on a mission to find American chestnut trees on Long Island. His goal is to preserve regional genetic stock for the day when the transgenic trees are introduced. In order to create blight resistant seedlings in the field, pollen from the transgenic trees is mixed with that of wild trees, including isolated ones. The blight resistant offspring can then be used to repopulate forests and other areas. For more information about Niko’s work, contact him at nikolaos.nantsis@gmail.com

Directions to the Red Trail Mashomack Tree: From the Visitors Center, follow the return red trail road until you reach a grove of American beeches. Then head down a hill. As you start back up the hill, there’s a small loop with stone benches and an interpretive sign. The chestnut is on the left, right next to the trail.