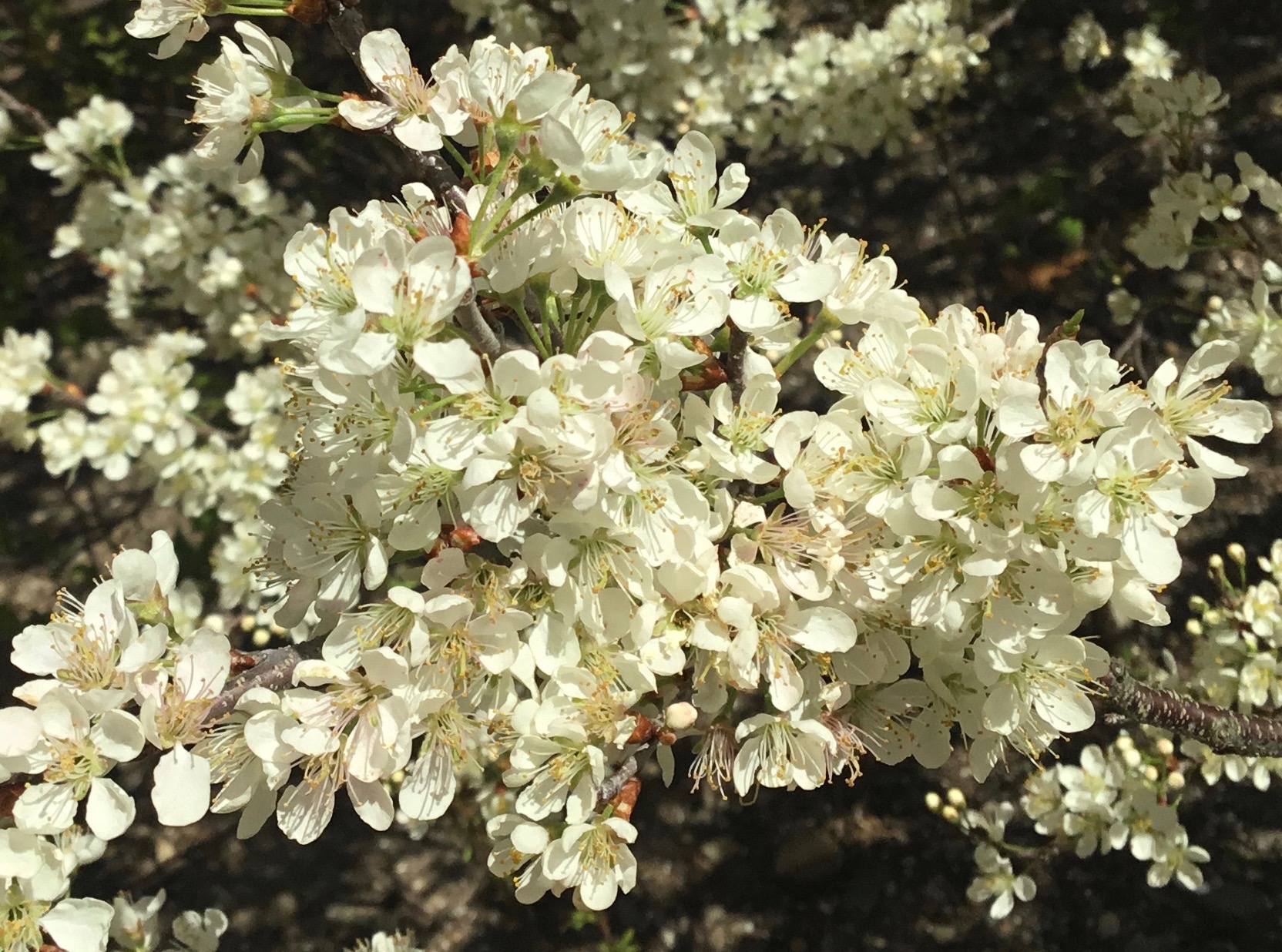 Locations: Beach plum occurs naturally as a low, spreading shrub on dunes and beaches. Look for them at Shell Beach. It also makes a handsome landscape plant in fast-draining soil and full sun. In my yard, three beach plums planted in 2002 have become small, multi-branched trees currently bedecked with white blossoms that attract a variety of pollinators.

Tree stats: Beach plum is native to northeast coastal regions from Maine to Maryland. It’s often seen growing with beach grass, bayberry, groundsel bush, and seaside goldenrod. Because of its deep roots and suckering habit, beach plum can form extensive thickets, making it an excellent dune stabilizer. The plums, which range from dark red to purple or, rarely, yellow, are prized by birds, mammals, and us. Plum Island was named for the plant.

Creature comfort food: Over the years I’ve observed different animals lured by my plums. Chipmunks start on the unripe fruit as if waiting for them to ripen would mean potentially losing out to competitors. Catbirds peck and pull at the plums and leave the rest to fall to the ground. One summer night, as I stargazed in a hammock, I heard the excited chattering of a raccoon family in the nearby, heavily laden trees. The next the morning I discovered they had eaten most of the plums. Oh, the tummy aches they must have had!

Beach plum yum: Like the raccoons, some people enjoy the plums raw. Personally, I find them astringent and not particularly tasty. But that’s why we invented jam. Several years ago, I had a bumper crop that was admired by Kirsten Lewis, a neighbor down the street. She collected a large bowl of plums and returned several days later with a jar of superb jam. Another admirer, Keith Lustofin, wanted the fruit to make a liqueur. The recipe was simple. Gather a quart of plums, mix them in a bottle with 3 cups (or enough to cover the plums) of either vodka or gin, and gently turn the bottle once a week until Christmas. Add sugar to taste. Keith used gin, I used vodka. The winner? Keith’s more flavorful brew was a potent, purple delight.

Put a porcelain or ceramic plate in the freezer to chill. Meanwhile, combine all ingredients in a 5- to 6-quart heavy-bottomed pot over medium-high heat.Bring to a simmer so that the plums release their juices. Let cook 5 more minutes. Then pour mixture into a strainer set over a bowl, and press on the solids to extract the juice and fruit.Return extract to heat and simmer, stirring often, 25 minutes. Reduce heat as needed to keep from boiling up. Remove the chilled plate from the freezer and spoon a small amount of jam onto it. It should thicken when it hits the cold. If it’s thick enough, stop there. If not, return the plate to the freezer and continue cooking the puree, checking it at 5-minute intervals, until it reaches the desired thickness (it should form a skin when chilled).Pour into hot, sterilized jars to within 1/4 inch of the top.