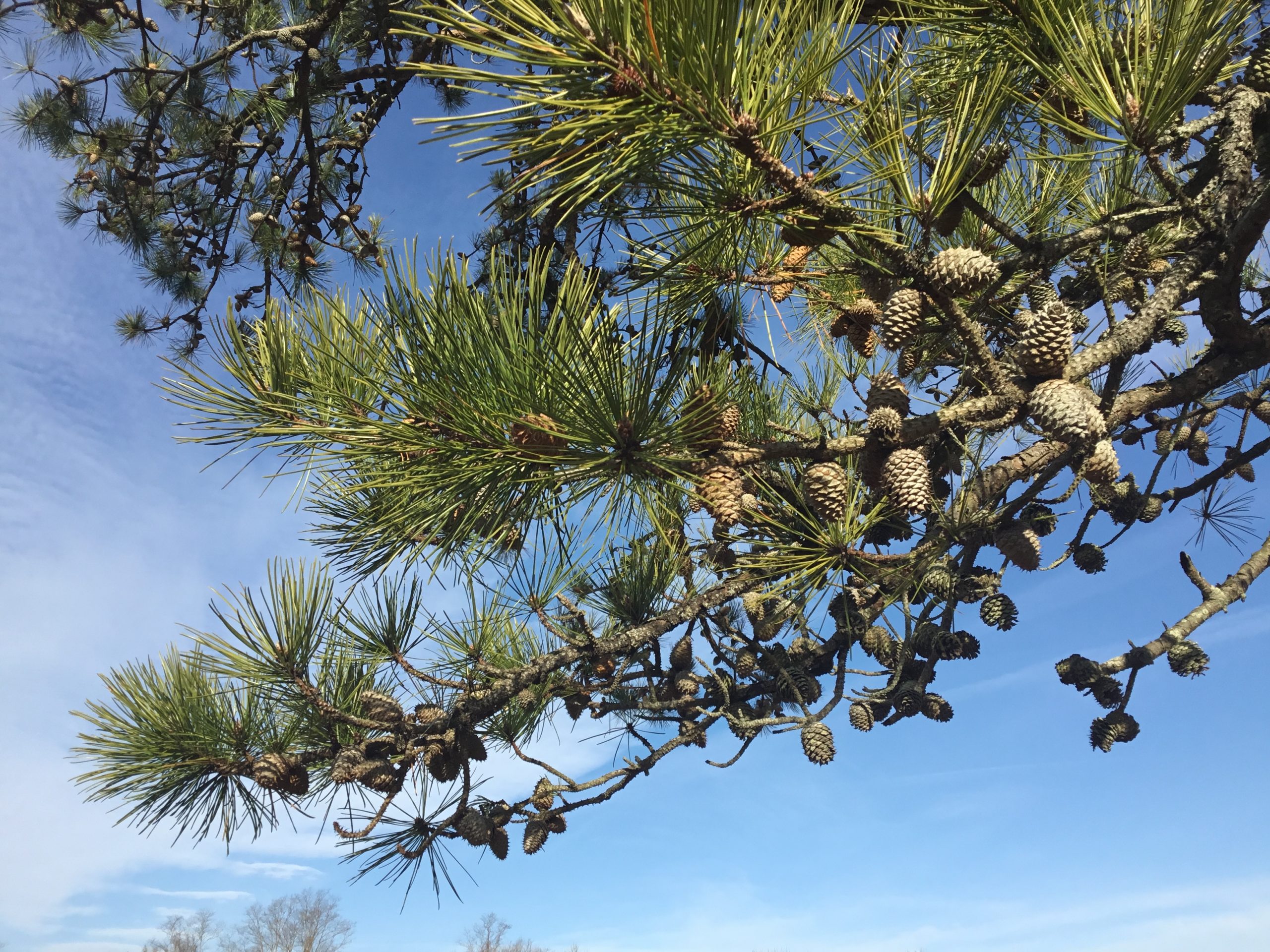 Location: Rare on Shelter Island, a trio of cone-laden pitch pines stands out at the horse farm along Ram Island Road.

Tree stats: The native pitch pine is a mostly eastern conifer that ranges from central Maine to northern Georgia. Depending upon location and conditions, they can vary in size from trees 80 feet tall to dwarf specimens or prostrate shrubs. Pines can be identified by the number of needles in a bundle or cluster. Pitch pine has three needles per bundle whereas white pine has five. I often wonder why pitch pine isn’t listed in garden reference books or planted more often on home landscapes. One reason may be that compared to the softer, more elegant white pine or other conifers, pitch pine can look rough and gnarled. Too bad, because in small groves or forests it’s a distinctive, beautiful tree.

A unique ecosystem: The 105,000-acre Central Pine Barrens in Suffolk County is a rich matrix of predominant pitch pine, oak species, and understory shrubs such as sweet-fern and bayberry, that supports an abundance of bird, mammalian, amphibian, reptile, and insect species, some of which are rare or threatened. Pine barrens are fire dependent ecosystems, meaning they need fire, whether by lightning or human intervention, to thrive. Without fire, they eventually become mixed hardwood forests. Pitch pine tolerates fire via a thick bark that protects dormant buds, allowing it to sprout post-fire growth through the trunk, crown, or base. Fire also aids the release of seeds by melting the hard resin on the cones.

Climate change threat: The native southern pine beetle first appeared on Long Island in 2014. Though the rice-size beetle can’t survive several days of -10 degrees, our winters are no longer reliably cold enough to kill it. According to John D. Wernet, a supervising forester with the regional DEC, the beetle migrated from the New Jersey pine barrens. The insect prefers pitch pine but will also attack other pines. And while some South Fork areas are currently experiencing infestations, Wernet states that there’s been a reduction of beetle activity in recent years. He attributes this to a suppression and management program that culls infested trees, a strategy that ideally prevents beetle colonies from communicating and spreading to new areas. When asked what would happen should the pitch pine vanish, Wernet says, “it would be a radical change to a globally rare ecosystem.” Unthinkable and yet possible.