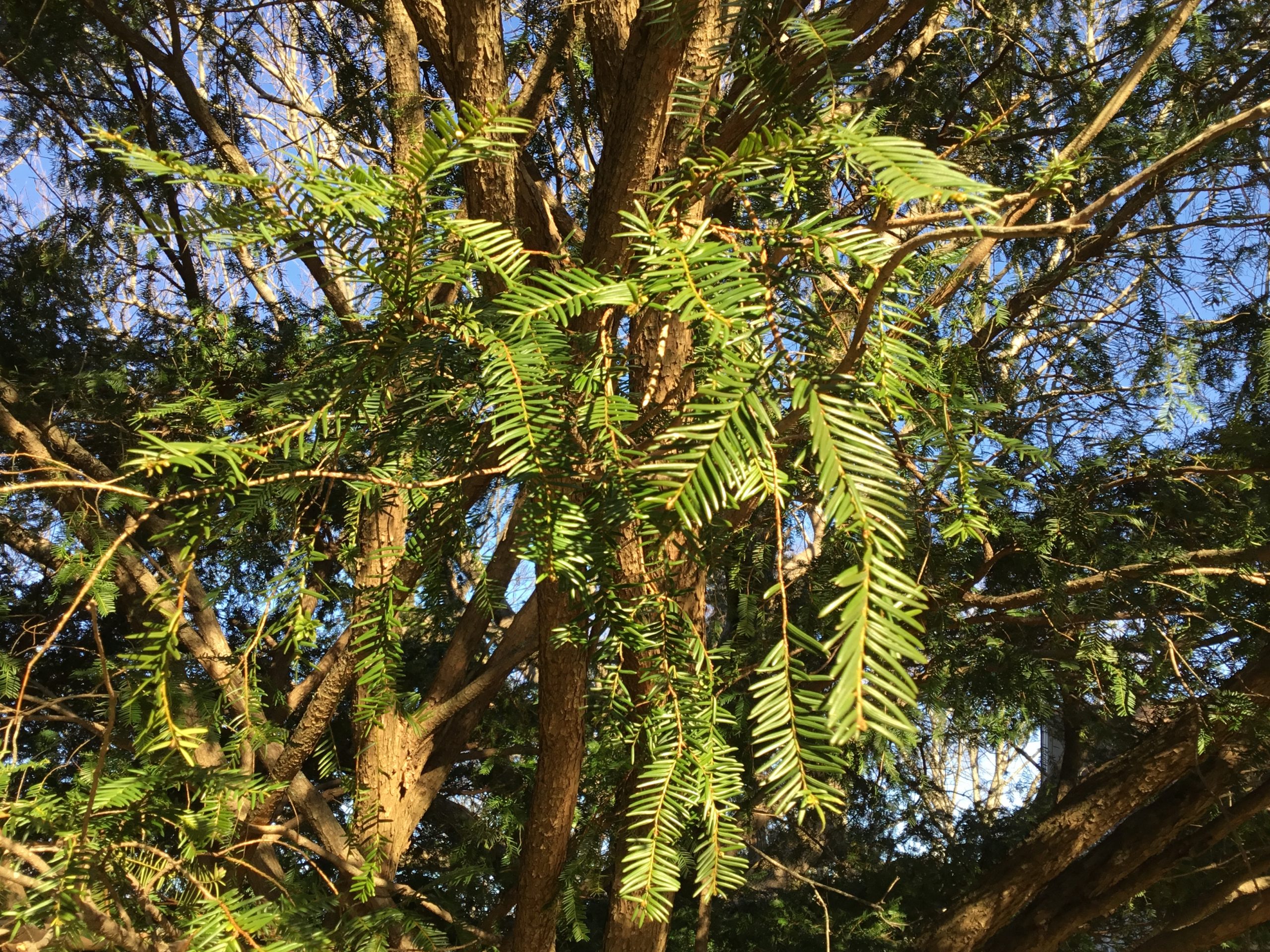 Locations: Four large, multi-trunked trees thrive in Montclair Colony at the corner of Gibbs and Simpson roads. Random specimens can be spotted around the Island.

Tree stats: Native to Europe, northern Africa, and western Asia, yew is a handsome evergreen conifer with dark green needles and rough, furrowed bark that can reach 60 feet. It’s often cultivated as a multi-trunked tree or large shrub and it readily takes shearing as a hedge or topiary. The tree’s seeds are enclosed in a bright red cup called an aril. As a child I remember being entranced by this seductive fruit on yew hedges and foundation plantings. Though the fruit is harmless, the enclosed seed and all other parts, including sawdust, are toxic to humans and animals with the exceptions of birds and some mammals. The website The Poison Garden (wouldn’t Agatha Christie have liked that?) reports that “yew is one of the plants where the poison is not destroyed when the plant dies. Thus, branches removed from a yew by high winds or pruning will retain their poison.”

All about yew: The tree was prized in medieval England for its religious significance and making longbows. According to Richard L. Bitner’s Timber Press Pocket Guide to Conifers, “It is claimed that Robin Hood made his weapons from this wood and was married under a yew as well as buried beneath one.” One of the oldest yew weapons, the Clacton spear (actually a tip), dates to 400,000 years ago. The demand for quality yew for longbows eventually led to its scarcity in England and other countries, an issue presumably resolved by the transition to firearms. Yew can be very long-lived. The Fortingall Yew, named after a village in Scotland, is estimated to be between 1,500 and 5,000 years old.

A lifesaving tree: In 1962, samples of the native Pacific or western yew, Taxus brevifolia, were collected and tested as part of a National Cancer Institute search for potential drugs. A compound isolated from the bark proved to be promising in treating breast and ovarian cancer. However, because harvesting the bark threatened the tree’s existence, researchers developed a semisynthetic version of the compound called Taxol, which is now used to treat a variety of cancers. Ironically, before the discovery of its medicinal properties, the Pacific yew was considered a useless weed tree with no commercial value.