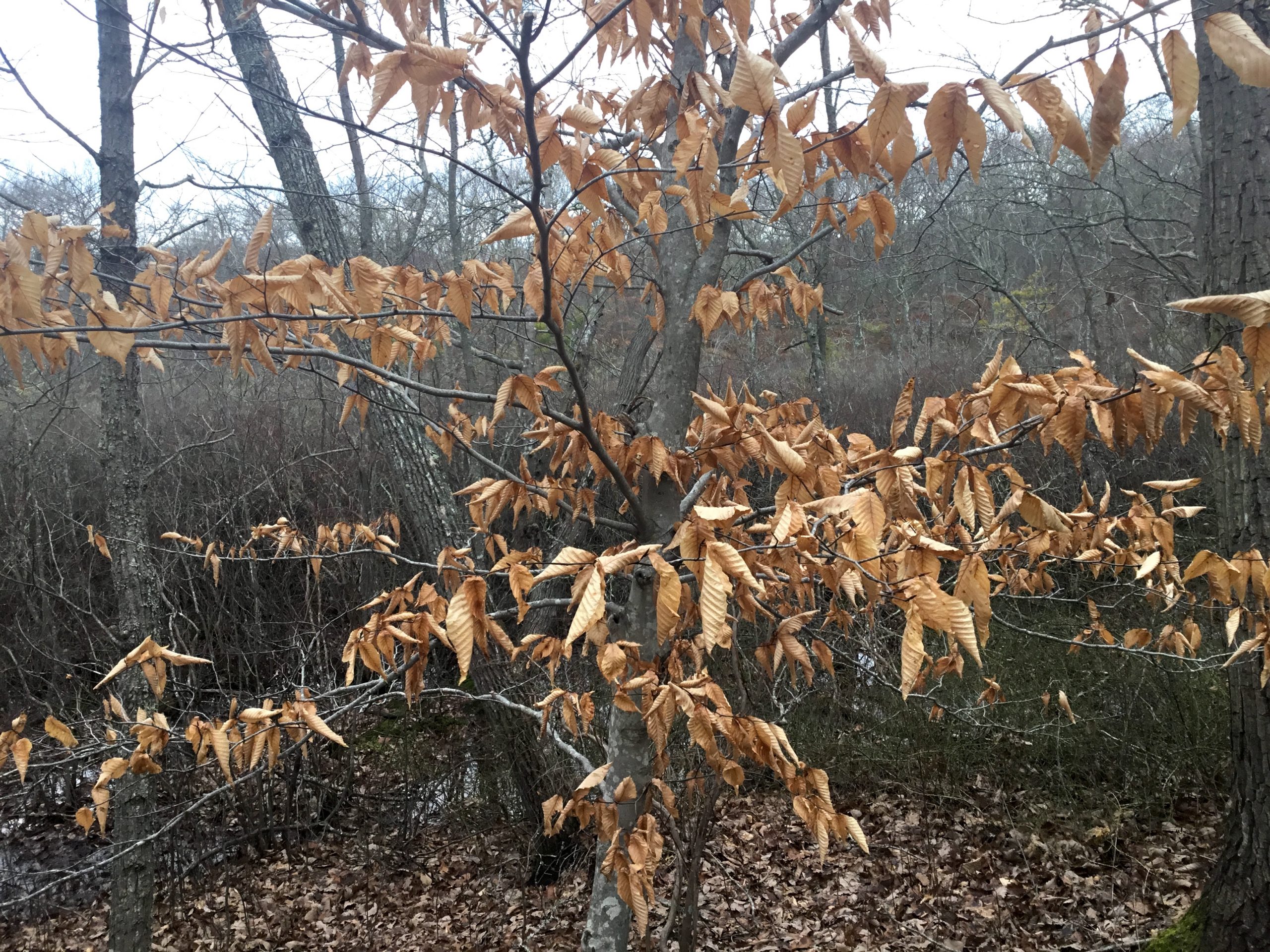 Locations: American beech thrives in Mashomack and Island woods. Numerous specimens, tall and short, are easily spotted along Heritage Drive. Aside from some oak species, they’re the only deciduous trees with leaves at this time of year.

Tree stats: American beech ranges from northern Florida to Nova Scotia and west to Illinois and Wisconsin. It can grow 75 to 100 feet tall and almost as wide, assuming it’s given the room. In some areas of Mashomack the trees flourish close together in familial colonies of adults and juveniles that have probably sprouted from the elder trees’ roots. The distinctively thin, light gray bark can unfortunately be irresistible to couples eager to immortalize their bond by carving their names on it. (Unless necessary, don’t cut into a tree.) In the fall, beechnuts are a food source for innumerable animals, including the now-extinct passenger pigeon which favored American beech, chestnut, and oaks for nesting and sustenance. The roots are shallow and, when exposed, creaturely muscular. American beech wood is useful for flooring and furniture.

A mysterious strategy: Though most deciduous species drop their leaves in autumn, the American beech holds onto them through part or most of the winter. It’s a trait called marcescence. Other marcescent species are some oaks and witch hazels, and hornbeams. The leaves of American beech, which turn a pale, ghostly brown, are usually retained on younger trees or the lower branches of older ones. It’s been surmised that marcescent trees do this to discourage deer browsing of dormant spring buds or, by dropping leaves in the spring, they’re nourishing the soil beneath them when nutrients are more useful.

A treasured tree: Because of its size, American beech is often planted in parks but rarely recommended for home gardens. Landscape designer and beech enthusiast Rick Darke argues that “with care and a little imagination, [American beech] can also contribute mightily to the more intimate landscapes in which so many of us make our homes.” Another fan was Henry David Thoreau who wrote, “I frequently tramped eight or ten miles through deep snow to keep an appointment with a beech-tree …” Happily, we don’t have to tramp as far to commune with the Mashomack trees.