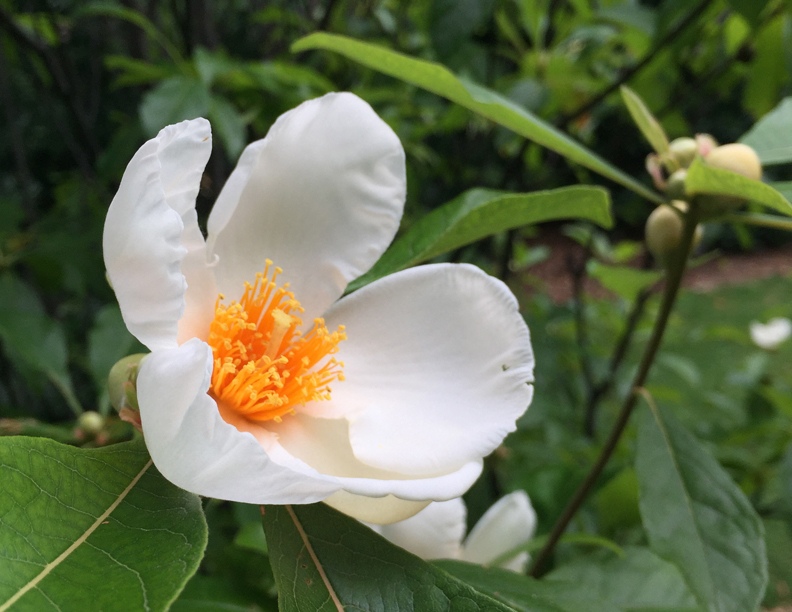 Location: Though I’ve long been aware of this fabled tree and often fantasized about growing one, I had never seen an actual specimen until I visited James Marshall and Adam Bundy’s wonderful, labrynthine garden in mid-September.

Botanic history: The native Franklin tree was originally found by botanist John Bartram and his son, William, flourishing along Georgia’s Altamaha River during a 1765 expedition. Upon a return trip in 1773, William collected seeds and planted them in his Philadelphia garden. In his Travels, William praises the species as “a flowering tree, of the first order for beauty and fragrance of blossoms…the flowers are very large…of a snow white colour, and ornamented with a crown or tassel of gold coloured refulgent staminae in their center.” At the time of its discovery, the tree was already rare, existing only on a 3-acre site. By the beginning of the 19th century, it had vanished from the wild. In honor of John’s friendship with Benjamin Franklin, William named the tree Franklinia alatamaha. (The scientific name is a variation of Altamaha.) Though related to the tea family, the Franklin tree is the only species in its genus.

A tree’s savior: There are several theories as to why the Franklin tree died out in the wild. The Altamaha trees may have been a remnant colony of a species pushed south during the ice age that was unable to adapt to the warmer climate. Or, the land was cleared for farming or the trees were wiped out by a pathogen. How fortuitous then that William returned, collected seeds, and successfully propagated plants that have been shared worldwide, otherwise the species would be extinct. Imagine how many species, some undiscovered, continue to be lost due to deforestation and natural forces.

Tree stats: Under ideal conditions, the Franklin tree grows 20 to 25-feet high and 15-feet wide. It can be single or multi-trunked. Hardy to zone 5, it blooms from August to early October and in the fall its leaves turn dazzling shades of orange, red, and purple before dropping for the winter.

Not for beginners: Apparently, the Franklin tree is not easy to cultivate. Plantsman Michael Dirr calls it “persnickety.” James Marshall was up to the challenge, planting three trees from Marders nursery. One has expired, but the other two are thriving, the flowers glowing in the September light. Despite the “love and attention” that James says they require (moist, well-drained soil that’s been enriched with organic material), his Franklin trees reward with the pleasures of their architectural branching and gorgeous, fragrant flowers when few trees are blooming.