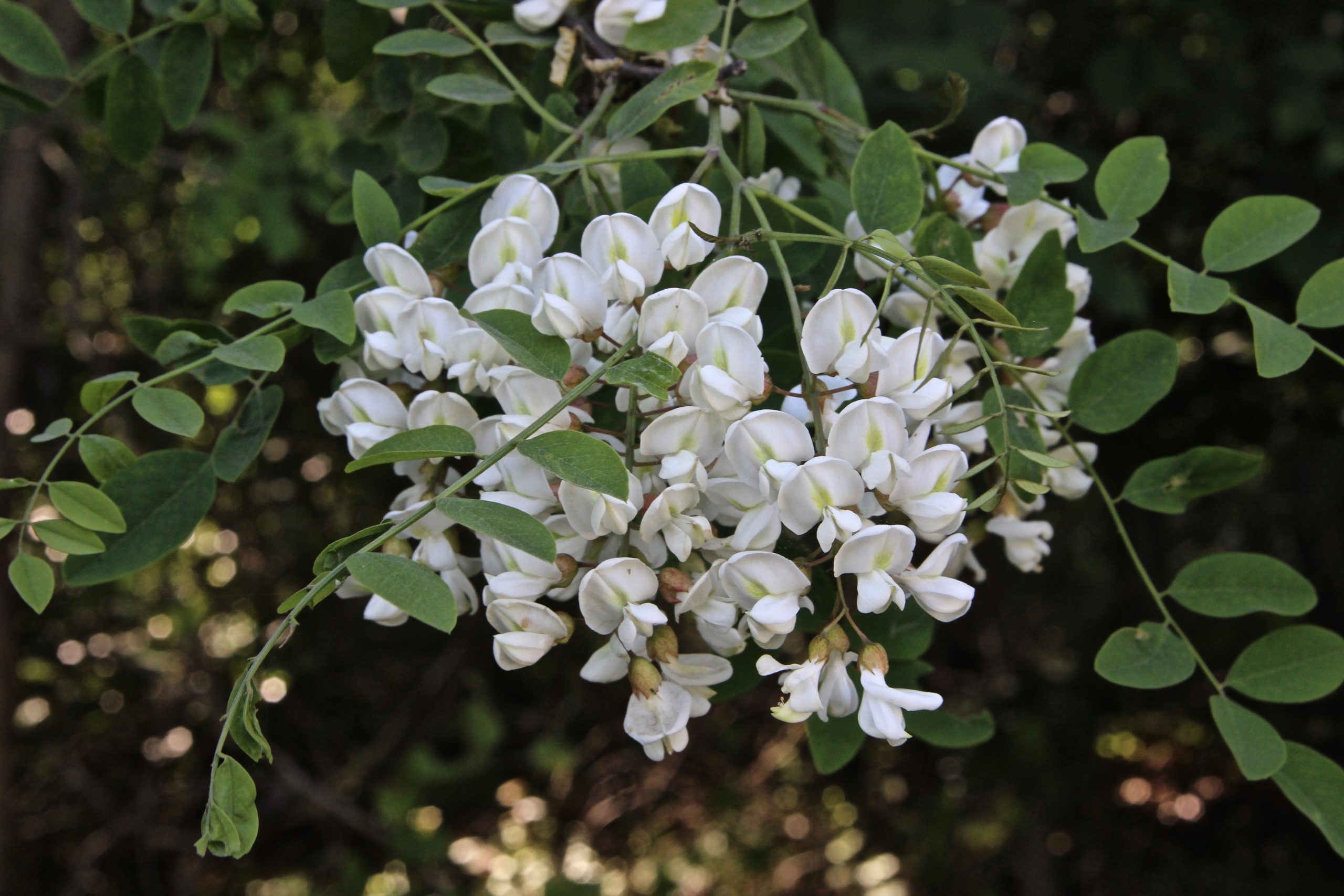 Tree Stats: Black locust is native to Pennsylvania and Iowa and south from Georgia to Oklahoma. This fast-growing but relatively short-lived tree usually tops out at 50 feet and spans 25 feet wide. Over time, the trunk and older branches develop a thick, furrowed bark in handsome contrast to the delicacy of the tree’s pale green, oval-shaped leaves. In June, black locusts are resplendent with clusters of white, fragrant flowers.

A Tree’s Value: According to some accounts, black locust was spread from its original locations by Native Americans, who favored the tree’s wood for their bows. Early settlers used the hard, rot resistant wood for fence posts, wood nails, and foundation posts. The tree was planted across America and imported to Europe where it became a popular street tree. As a child I enjoyed exploring underneath the porch of my family’s 19th century Shelter Island house which, like many older homes on the Island, was supported by locust posts. My father claimed that burning black locust firewood had a pleasant aroma. Today, black locust lumber is still popular. And, because the tree tolerates poor, infertile soil, and can fix nitrogen in its roots, it’s often used for erosion control and mine reclamation projects.

Game of Thorns: Black locust saplings and the branches of older trees are covered with formidable thorns. Like a rhinoceros’s horn, a stegosaurus’s spiky tail or a medieval spiked ball, it’s a defense mechanism that means business. I’m always surprised when I (stupidly) yank out a young tree with bare hands and (painfully) rediscover just how effective the thorns are.

Native isn’t always best: After centuries of moving plants around the world, we’ve become more aware of the consequences. On Long Island, imports such as Asiatic bittersweet, multiflora rose, and Russian olive have caused havoc by overwhelming indigenous species. And while going native is a necessary trend, the black locust presents an example of a plant that can be as destructive as any introduced invasive. Though the tree spreads by seeds, it does the most damage with its suckering habit, rapidly colonizing open areas and transforming them into impenetrable thickets. It’s now considered invasive in several states as well as in Australia and South Africa.

And yet…: One summer day, as I sat chatting with Esther Hunt in her home, she spoke lovingly about the black locust trees that grace her front lawn, each growing far enough apart to assert their own character and rough beauty.