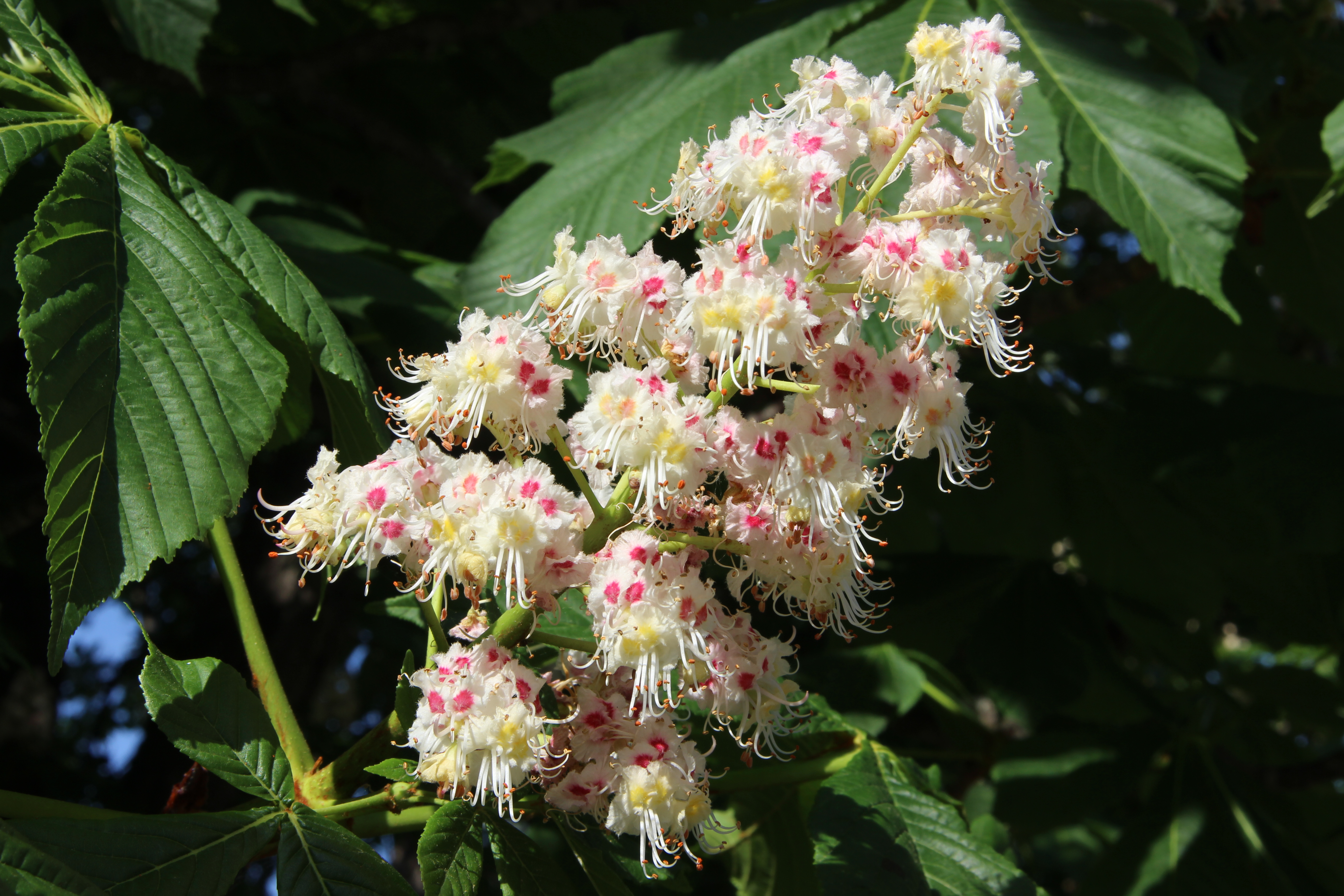 Locations: In late May and early June common horsechestnuts are in dazzling bloom in various Island neighborhoods. Standouts include trees along Smith Street and a large specimen in front of Havens House.

Tree stats: Native to the forests of Greece and Albania, common horsechestnut grows up to 300 feet tall. In bloom, the trees are impossible to miss with their upright clusters of white flowers stained with magenta and yellow. The large, dark leaves hang gracefully from the branches like tree hands with five or seven fingers. The flowers are followed by prickly fruit which contain one or two brown, shiny seeds. In the fall, the leaves can turn a handsome yellow.

Landscape uses: Horsechestnuts are impressive roadside and landscape trees if given room to grow properly. The Havens tree was planted too close to a tuliptree (or visa versa), thus impinging the width of both. The horsechestnut’s one downside is a tendency for the leaves to scorch or turn brown by the middle of summer. Fungicide may be applied when the leaves emerge though this strategy is limited to smaller trees.

A Word of Caution: Common horsechestnut seeds look similar to those of the sweet chestnut (Castanea sativa). However, the former is toxic to humans while the latter has been a nutritious and delicious food staple for centuries.

Think Pink: While common horsechestnut flowers are glorious, the flowers of Aesculus X carnea, a hybrid between Aesculus hippocastenum and the native red buckeye (Aesculus pavia), are a striking deep pink. Small groupings of this hybrid, planted by Friends of Trees a decade ago, are thriving along Menantic and Manhansett roads. The native red buckeye is worth growing for its stunning red flowers. Many years ago I was thrilled by a colony of them blooming in Central Park. Unlike common horsechestnut, A. pavia needs understory shade and moist soil.

Bonkers for Conkers: Though horsechestnut seeds are inedible, they were once used as a cure for horse ailments, thus the tree’s common name. The seeds are more amusingly used for the time-honored British game of Conkers. Each player has a horsechestnut seed (known as a conker) that has been threaded with string. The player who smashes an opponent’s seed first is declared the winner. No longer just a children’s pastime, competitive tournaments have become popular in Britain and America. An annual North American Conker Championship takes place in October in Annapolis Royal, Nova Scotia. As a demonstration of the organization’s semi-seriousness, its site lists sixteen “Rules of Engagement for the Noble Game of Conkers.” (Sample rule: “A distance of no less than 8″ or 20cm of lace must be between knuckle and conker.”) Sounds like a potential fun event on Shelter Island.