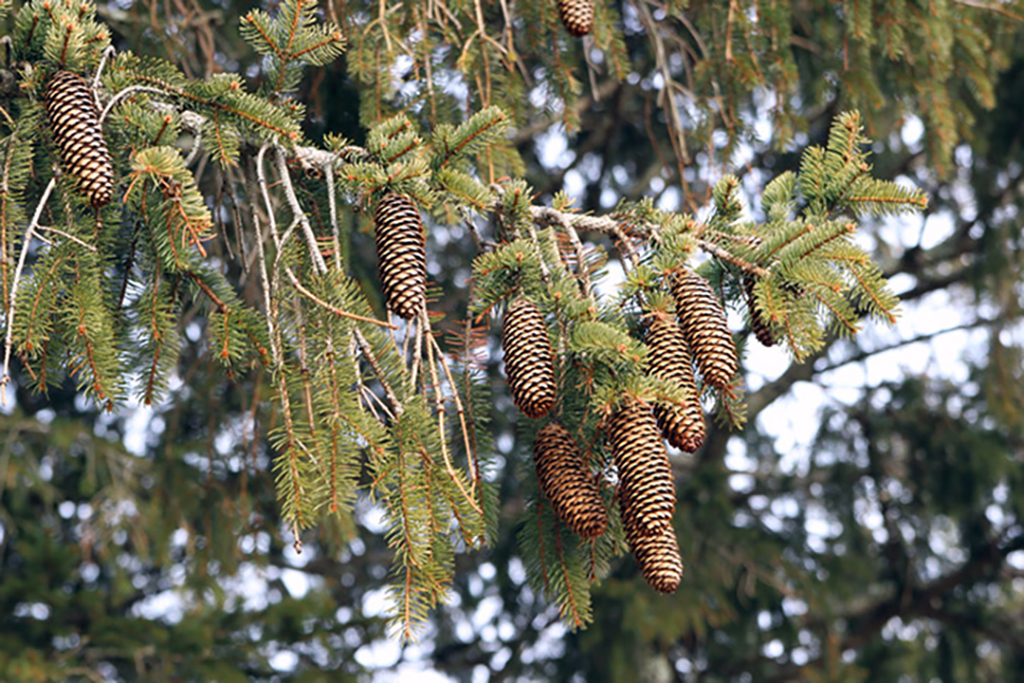 Location: Though the species can be found in many areas around the Island, it’s most prominent at the Goat Hill golf course where a row of tall trees tower near the second and third holes.

Tree stats: An evergreen conifer, Norway spruce is native to northern and central Europe. In the wild the species can grow up to 200 feet and is long lived. It was introduced in Britain in the 16th century and has been a mainstay of Canadian and American landscapes and forests for decades. As a mature specimen, Norway spruce is handsomely pyramidal with upturned primary branches and drooping branchlets. Many of the Goat Hill trees are decorated with large cones that last through the winter. On some of the trees, the trunks are heavily stained with dried white pitch that looks like bird guano.

The oldest? Many Internet sites claim that a Norway spruce called Old Tjikko is one of the world’s most ancient trees. Discovered in Sweden in 2004, the 16-foot-high tree supposedly sprouted from a root system that’s around 9,560 years old. (Some trees reproduce clonally.) Tom Kimmerer, a Kentucky-based scientist and author, disputes this conclusion on his website Venerable Trees, suggesting that the older wood on the ground and the tree that grows above it may not be genetically connected. Until further tests are conducted, he surmises that Old Kjikko is actually a relatively young 80 years.

Isn’t it good, Norwegian wood? Yes! Norway spruce is valued for its strength and fine grain for furniture, musical instruments, and pulp. It’s also utilized by birds and mammals, which feed on the seeds, seedlings, and foliage. And like many evergreens, it provides animals with year-round protection and cover. Humans make use of the soft new growth for spruce beer, a concoction I wrote about in a previous column. The beverage seemed enticing until I recently read that it can taste like turpentine.

A tree for all gardens: Because of its size, Norway spruce isn’t suitable for most home landscapes. Fortunately, there are over 160 cultivars and varieties of different shapes, sizes, and color forms. ‘Nudiformis’ grows 3-6 feet high and wide, ‘Perry’s Gold’ has yellow spring foliage, and ‘Pendula’ has a weeping habit. For tiny yards, there’s ‘Pygmaea,’ which reportedly take almost twenty years to grow 18 or so inches. That sounds like the plant equivalent of watching water boil.