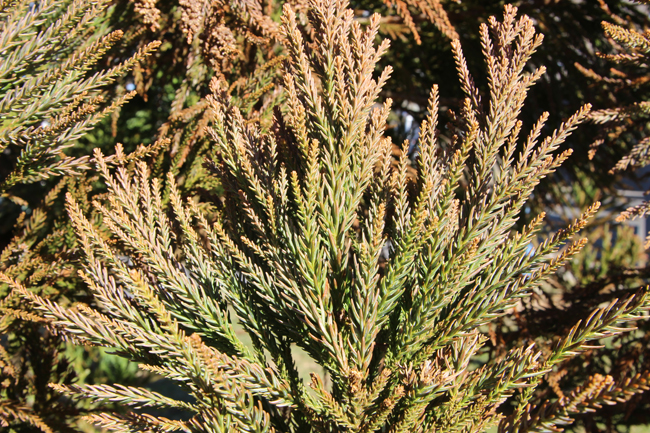 Locations: Cryptomeria trees of various sizes are sprinkled throughout the Island. A smallish one grows to the right side of the Library entrance. I’ve seen a magnificent specimenl in a private garden on Cobbetts Lane and ten mammoth trees stand guard in front of a friend’s home on Linda Road.

Tree stats: Endemic to the forests of Japan, the evergreen Cryptomeria can reach 150 feet in the wild. Although called the Japanese cedar, the tree is actually in the cypress family. In Japan, where Cryptomeria is known as sugi, one specimen in Yakushima known as the Jomon sugi is reported to be between 2,000 and 7,000 years old. Cryptomeria is now common in Britain, Europe, North America, and the mountainous regions of India and Nepal. The wood is valued for its strength and resistance to decay. For homeowners with small yards there are several dwarf cultivars that can be tucked in between shrub and perennial borders. Cryptomeria is also a popular bonsai tree.

HEDGE HOG: The handsome Cryptomeria is not to be confused with the similar-looking Leland Cypress. Though both species can be used as hedging material, Leland Cypress is coarse compared to the more elegant Cryptomeria. As an evergreen barrier, both have the drawback of becoming excessively tall, though Leland Cypress probably accommodates being topped better than Cryptomeria. In Britain, Leland Cypress has become so ubiquitous and controversial that one guide refers to it as “the most planted and the most hated garden tree.” By 2005 the tree had provoked 17,000 disputes between neighbors as well as several murders. In response, Britain now legislates the height of hedges under the Orwellian sounding Anti-social Behaviour Act.

HEDGE FUN: Instead of privet, Leland Cypress, or Cryptomeria, homeowners should consider a tapestry of trees and shrubs to create a friendly border that can be appreciated on both sides. On one side of my yard, I’ve planted a grouping of deciduous Viburnums, a Crepe Myrtle, and various perennials that attracts birds and doesn’t block the sky or light.

CRYPTOCURRENCY: For homeowners with spacious yards you can’t go wrong with one or three Cryptomerias. They grow fast, have soft foliage, and develop a massive reddish trunk that resembles that of the redwood. And instead of planting them in rows or too close together, give them room to spread out and attain their pyramidal splendor. A well-grown Cryptomeria is a treasure. No wonder the Japanese planted them around their temples and shrines.