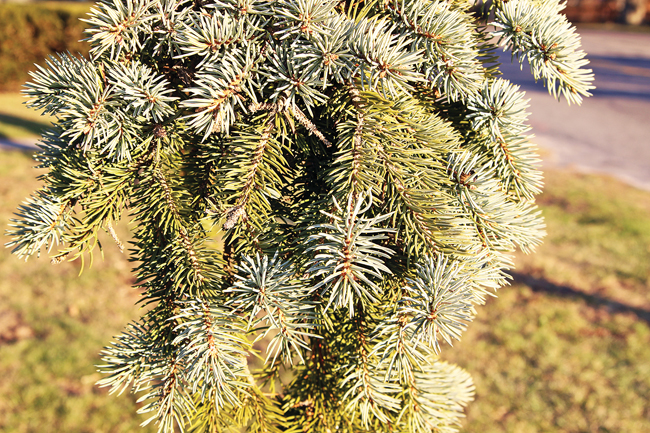 Locations: Two towering Colorado spruces dominate opposite corners of 114 and East Thomas Street by the Justice Hall and Police Department. The trees are also a common component of landscapes throughout the Island.

Tree stats: Native to (surprise!) Colorado as well as Utah, Wyoming, and New Mexico, this evergreen tree is long lived and can grow to 100 feet tall. It’s become a popular tree due to its dense, pyramidal shape and the captivating colors of its needles—most particularly the blue varieties, which inspired the tree’s common name “Blue Spruce.” There are innumerable cultivars and varieties to fit small and large home landscapes. ‘Hoospii’ has silvery blue needles while other varieties offer pendulous branching or a more narrow profile.

Spruce Christmas: The Colorado spruce makes an excellent indoor tree. Young trees have a handsome, full symmetry and their strong branches handle heavy ornaments. They reputedly also have good needle retention. If you don’t want a cut tree, try a small balled or potted one that can be planted in the yard after the holidays to provide winter interest and a cozy haven for birds and other animals.

Spruce beer: As any connoisseur knows, beer is available with all sorts of creative flavorings (pizza beer anyone?). In colonial times, it was popular to add clipped spruce buds to the mix. Benjamin Franklin offered his recipe after sampling a spruce-flavored brew in France. Another 18th century recipe, from Amelia Simmons, recommended “eight ounces of essence of spruce.” Aside from the spicy flavor, there was the bonus of the vitamin C contained in the needles. Spruce beer would become a staple for sailors on long voyages until limes and lemons did the trick.

Home brew: DIY brewers can make their own version of spruce beer by snipping off Colorado spruce sprigs (leave enough for the tree) or by ordering them online from companies like Spruce On Tap. Though spruce beer is considered a Christmas treat, it sounds tasty enough for all seasons.