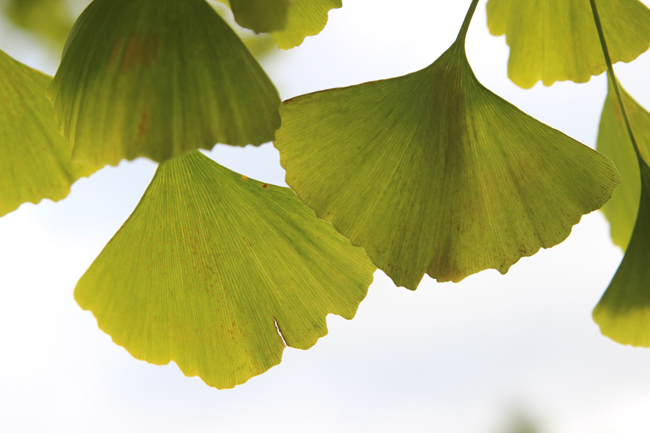 Locations: Two ginkgos stand guard at the school playground. Two other trees border the Heights tennis court and there’s a small grove of them at the Sylvester Manor garden.

Tree stats: Native to China, the ginkgo is also known as the maidenhair tree because its unique, fan-shaped leaves resemble those of the maidenhair fern. Ginkgos are adaptable to a variety of soils and temperatures, thriving from Massachusetts to Florida. They can grow 50 to 80 feet high and 35 feet wide. They are very long lived. A specimen at a temple in China’s Zhongnan Mountains is reported to be 1,400 years old. In the fall, the leaves turn a brilliant yellow. According to tree guru Michael Dirr, ginkgos can shed all their leaves at once if hit with a hard freeze. The ginkgo was imported to Europe in the 1750s and America in 1784.

An ancient history: As the only surviving member of an order of trees that dates back to 250 million years ago, ginkgo biloba is considered a living fossil. Botanist and author Peter Crane surmises in his book, Ginkgo: The Tree That Time Forgot, that ginkgo biloba almost vanished when the mammals (and dinosaurs, possibly) that ingested and dispersed its fruit went extinct. Think of that when you touch a ginkgo leaf: You’re connecting with a realm of plants and creatures long gone.

Stinko ginkgo: Though New York City has male and female trees, the ones at our school are male for a specific reason. Female trees produce fruits that apparently smell like vomit when they fall to the ground and rot. Despite this malodorous aroma, the fruits are still gathered for the flavorful nuts inside that are grilled, boiled or steamed. In ancient China, the nuts were also valued for their medicinal properties. Today, online stores offer supplements made mostly from the leaves.

A tree’s resilience: The ginkgo has become one of the world’s most popular urban trees, flourishing despite air pollution, salt, and other abuses. In gardens and landscapes they are less susceptible to insect damage and fungal diseases. Even more remarkable, they can survive an atomic blast. After the bomb was dropped on Hiroshima, approximately 170 trees of different species withstood the cataclysm. Among them were six ginkgos that are still alive and, like the other trees, commemorated with plaques. They are known as Hibaku Jumoku, which means “Survivor Tree.”