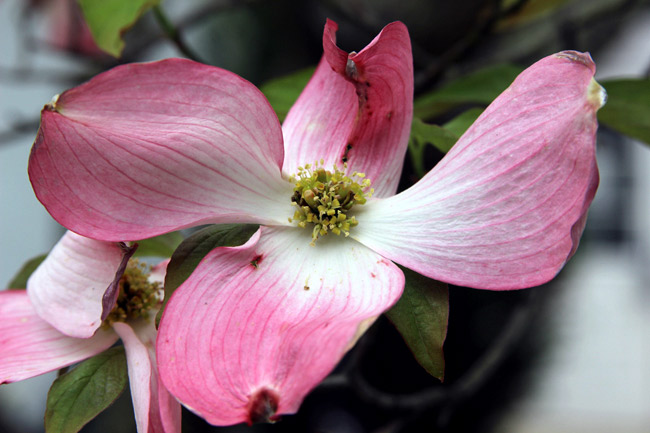 Location: The flowering dogwoods have been spectacular this spring. Until last week, a handsome specimen stood out on the corner of Bateman and North Midway. Two others were prominent next to the library and in front of the school. Others were blooming in front of Center homes as well as along Route 114.

Tree stats: Flowering dogwood (also known as American dogwood) is treasured for its May show of white bracts that unfold before the leaves emerge. And yes, those gaudy petals are actually insect-attracting bracts that surround a small cluster of greenish flowers. Though dogwoods are understory trees, thriving in the high shade of wooded areas, they can grow in full sun if given enough moisture in hot, dry weather. Dogwoods are excellent choices for small yards because they top out at 30 feet or less. Aside from the common white, dogwood trees are also available in a luscious pink and a red variety called ‘Cherokee Chief.’ Pollinated flowers develop into berries and the leaves turn pleasing shades of purple and red in the fall.

The birds and the berries: Though reportedly poisonous to humans, flowering dogwood berries are relished by northern flickers, robins, cedar waxwings, and cardinals. The birds are attracted to the fruit’s shiny red color and high fat content. It’s a nifty example of a tree’s seductive strategy for extending its range. While squirrels and chipmunks also eat the berries, birds travel farther, excreting the seeds potentially miles from the mother tree.

A tree’s value: Native Americans favored flowering dogwoods for a variety of purposes. According to John Eastman’s The Book of Forest and Thicket, the root bark produced “a scarlet dye for blankets, feathers and belts.” The inner bark was boiled for diarrhea and fever medicine. During the Civil War a tonic brewed from the bark substituted for quinine to treat malaria. Today, the tree’s notably dense wood is used for archery bows, mallets, and shuttles for weaving.

Dogwood diseases: Like many trees, the flowering dogwood is susceptible to a range of maladies, including powdery mildew, canker and dogwood anthracnose. The latter — a fungal disease affecting the leaves, twigs, and trunk — damages or kills dogwoods in woods and gardens. (It’s one of the reasons for the popularity of the kousa dogwood.) But don’t let this stop you from planting one. The disease can be treatable. As a preventative, an Island arborist suggests limiting stress and preventing damage to the trunk from lawn mowers, weed whackers, and trimmers. And if you inherit an old, struggling tree don’t give up on it. An expert can often perform magic with pruning and fertilizer. You’ll be rewarded for the effort every spring.