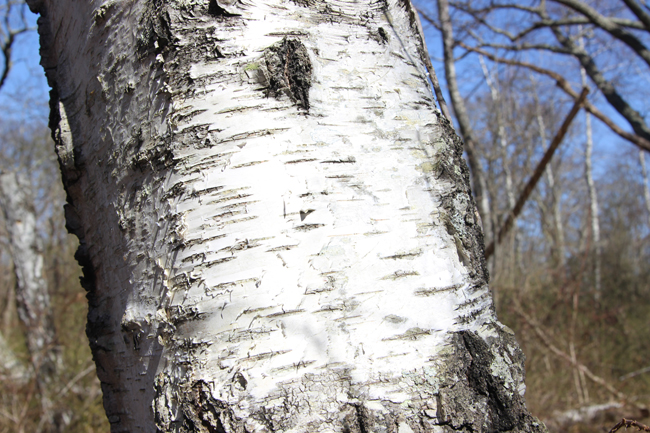 Tree mystery: I had always thought that the red trail trees were the native white birch (B. papyrifera). Not so, and an example of how the identification of similar-looking trees can be tricky. A plant survey from 2002 lists them as gray birch (B. populifolia). When I double-checked with Cindy Belt, Mashomack’s Education and Outreach Coordinator, she cited a more recent assessment, which deems the trees to be European white birch (B. pendula). Mystery solved!

Tree stats: European white birch was once a popular landscape tree that has now been demoted due to its susceptibility to bronze birch borer. (The Mashomack trees seem fine.) Gray birch ranges from eastern Canada down to Delaware. Its adaptability to dry, acid soils has made it useful for mine reclamation projects. The white birch, also known as paper or canoe birch, is a hardy boreal forest species that flourishes across Canada and down to the northern United States. River birch (B. nigra), which ranges in the east from Massachusetts to northern Florida, is distinguished by its salmon-colored, flaky bark. The popular cultivar ‘Heritage’ is a handsome choice for small or large landscapes, particularly when several trees are grouped together.

A tree’s value: According to John Eastman’s book, Forest and Thicket, “Probably no tree served the northern Native American tribes in so many ways as white birch.” Its sap produced sugar, its bark was used to make canoes, housing, sacred scrolls, and containers, and dyes were obtained from its roots. The Chippewa believed scars left by fallen branches were “thunderbirds” created by the deity Winebojo.

Birch canoes: Native Americans constructed canoes in various sizes — from small ones for a single person to larger vessels that transported up to 12 people. The waterproof bark was removed from a felled tree and then stretched around a frame constructed from a different wood. Various other plant materials were used as pitch and thread. (Several websites offer DIY guidance.) The canoes were light and durable but also delicate. Henry David Thoreau, who wrote about several excursions in birch canoes, was cautioned “that we should not step into it on shore, nor till it floated free, and then should step gently lest we should open its seams, or make a hole in the bottom.” White birch canoes are still made today by craftsman and Native American tribes. For further reading on the subject, I recommend John McPhee’s book, The Survival of the Bark Canoe.