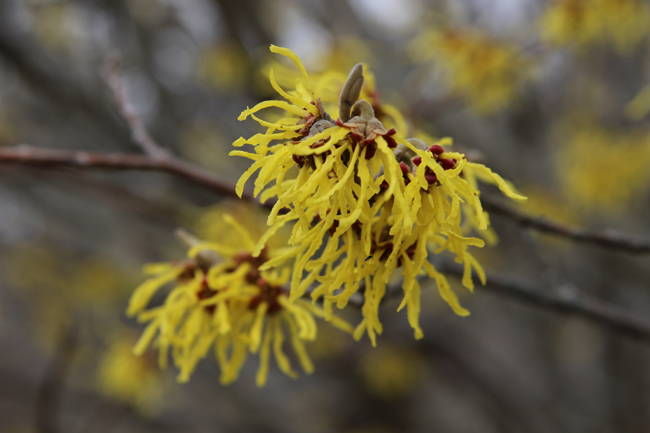 Location: In the bleak month of February when winter seems endless, few sights are as welcome as the bright yellow flowers of the witch hazel. A gorgeous, multi-trunked specimen stands out like a floral torch on 59 South Midway Road in front of James and Linda Eklund’s house.

Tree stats: The Eklund’s shrub-like tree is probably a hybrid between the Japanese Hamemalis japonica and the Chinese Hamemalis mollis that’s named ‘Arnold Promise.’ Hybrids between the two species have produced a number of winter blooming shrubs and small trees with yellow, red, orange or purple flowers. I successfully grow ‘Arnold Promise’ in my yard. Despite sandy soil and harsh winter winds, it usually starts blooming in mid-February with scented yellow flowers that open even after a heavy snow. The petals protectively curl up during severe cold conditions and unfurl when temperatures are warmer. ‘Arnold Promise’ can get relatively large. I’ve seen ones at the Planting Fields Arboretum that are 20 feet tall. The flowers of witch hazel last through March and sometimes to mid-April when the spring blooming shrubs and trees take over.

Native witch hazel: The indigenous common witch hazel, Hamemalis virginiana, has fragrant yellow flowers that bloom in the fall through December. A small tree that prefers deciduous woods, common witch hazel possesses the nifty trick of propelling its seeds up to 30 feet away.

Witch hazel magic: The Y-shaped branches of common witch hazel were also used by Native Americans as divining rods for locating underground water, a practice passed onto the colonists and continued today. As for the “witch” in witch hazel, it refers to the Anglo-Saxon word wych, meaning “bend” and is not a reference to the flying-on-a-broomstick kind. However, modern-day witches and sorcerers do appreciate the tree’s alchemical properties. For further information, check out the appropriately-named website Witchipedia.