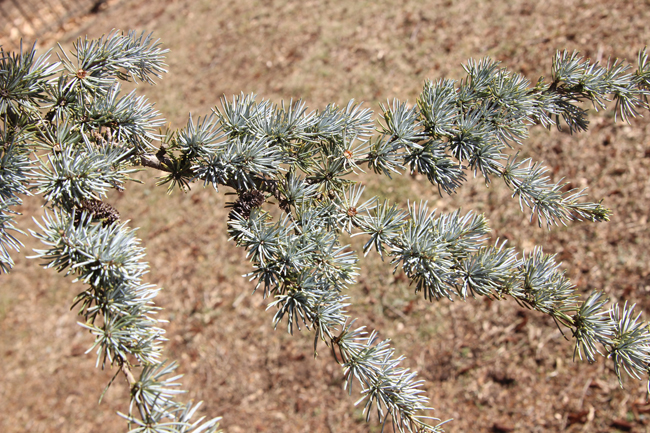 Location: A dense, multi-branched Atlas cedar thrives on the Shelter Island School grounds next to the vegetable garden. The specimen is most likely the cultivar ‘Glauca’, which is also known as the blue Atlas cedar.

Tree stats: Native to the Atlas Mountains in Morocco and Algeria, Atlas cedar is an evergreen conifer that can reach up to 120 feet. The pale blue needles of ‘Glauca’ are arranged in small bunches along the branches like tiny shrubs. Male and female cones are produced on the same tree. The smaller male cones release their pollen in the fall; the three-inch female cones take two years to develop. A popular landscape tree in Europe and America, Atlas cedars grow in various soils, including dry and sandy. If you’re thinking of planting one, give it room to spread. Aside from ‘Glauca’, other cultivars exhibit dwarf or weeping habits.

Methuselah: Atlas cedars are long-lived. One of the oldest, around 900 years old, died in 2003. Named after Henri Gouraud, a French WWI general, the graffiti-covered skeleton of the tree stands tall in a Moroccan preserve. Check out online photos to get an idea of its size.

Cedars in peril: Aromatic Atlas cedar wood is prized for woodworking and as a source for essential oil. While major deforestation has declined in Morocco, the tree’s value makes it continually vulnerable to poaching. In addition, climate change is causing drier conditions that stress the trees. They’re also damaged by bark beetles, grazing goats and sheep, and endemic Barbary macaques that strip off bark for food.

Trees in peril: The potential loss of the Moroccan cedars could also affect the people who depend upon the water the trees retain by limiting runoff. While Shelter Island doesn’t have many endangered species, our trees provide equally important functions. Oaks give shade, food and cover for insects, birds, and mammals. The red cedars that populate much of the first Ram Island causeway support wildlife while lessening the impact of flooding and wind. The recent cutting of red cedars and other trees on County property near Menhaden Lane should be a reminder that we too often take our trees for granted. The threats to Atlas cedars in Moroccan forests may seem far away but the message is the same — in a rapidly changing world, trees everywhere need our vigilance and protection.