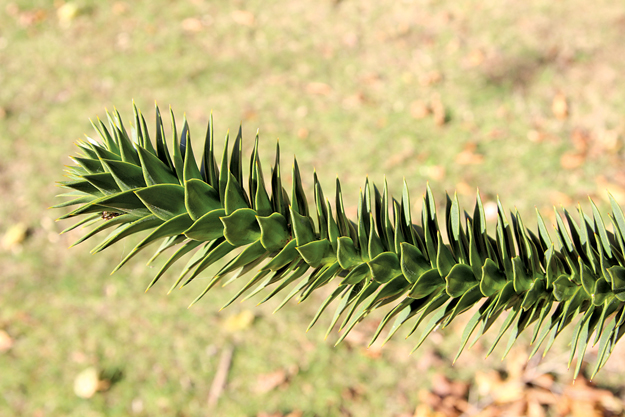 Locations: The monkey puzzle is, hands down, the most bizarre tree on Shelter Island. Two specimens are visible along Route 114. One is located at 151 North Ferry Road, the site of the former Evans Griffing house. The top portion of the 40-foot tree can be seen from the roadside hedge. The other is at George Schultheis’ house, which is marked by the red Green Acre Farm sign. According to Robin Collins, the Griffing tree was planted in the early 1930s as a “curiosity.” George grew his 20-year-old tree from seed. Since both trees are on private property, don’t trespass without permission and take caution when pulling over.

Tree stats: Known also as the Chilean pine, the monkey puzzle is an ancient evergreen conifer that grows in the temperate forests of Chile and Argentina. It can grow to 90 feet tall and live for 150 years (some sources say 1,000 years). The female trees produce large, coconut-like cones that contain hundreds of seeds. Apparently, they’re heavy. Several years ago, a man standing underneath a tree in a San Francisco park was hit on the head and severely injured by a falling cone.

Don’t hug this tree: The monkey puzzle’s leaves are stiff and sharp and, when young, the bark is encircled with even sharper spines that look like shark teeth. We think of trees as defenseless but here’s a marvelous, if extreme, example of a tree using formidable weaponry to protect itself from browsing. When the tree gets taller, the lower bark loses its armor and becomes thick and furrowed.

What’s with the name?: In the 1840s or 50s a young tree was acquired by Sir William Molesworth for Pencarrow House, his estate in Cornwall, England. One evening Sir William was showing off his prize specimen to guests when one of them, a famous barrister named Charles Austin, fingered the barbed branches and joked that they “would be a puzzle for a monkey.” And so the Araucaria got its common name even though in its native range there are no monkeys.

More than a novelty: While the monkey puzzle was enormously popular in Victorian England and has since been planted throughout the world, the tree’s large seeds remain a valued food source for South America’s indigenous populations. The seeds can be consumed toasted or made into flour, which is used to make a fermented beverage. The wood was once a popular source for ship masts, paper pulp, and railway sleepers.

The tree’s future: Though intense exploitation of the monkey puzzle in its native forests has diminished, the trees are still being lost to logging and fires. The tree’s survival in the wild may hinge upon the indigenous people who depend upon it. A recent study reports that local communities are exploring sustainable forestry by replanting logged areas with the monkey puzzle and other native species. To get a glimpse of the special majesty of these trees, check out “Mapuche Amerindians Migrating Through Monkey Puzzle Tree Forest” on YouTube.