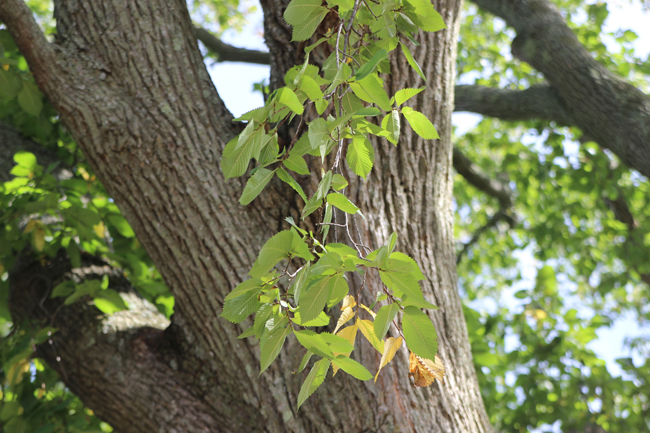 Locations: A large American elm grows at the edge of Prospect Park across from the tennis courts. Nearby, another tree hovers over Summerfield Place. There’s a splendid specimen in Sylvester Manor to the right side of the driveway approaching the Manor and three huge trees can be found on Baldwin, South Menantic, and Sunshine roads. In East Hampton, magnificent old trees line Main Street and other locations.

Tree stats: The American elm originally ranged from Alberta to Texas and Nova Scotia to Florida. Also known as the white and water elm, it’s adaptable to moist and dry soils and is fast growing, reaching up to 125 feet. The wind pollinated flowers turn into winged fruit called samaras. Tall, vase-shaped elms were once favored street trees in American towns and small cities until the 1930s when the Dutch elm disease began killing them across the country. Though our East End trees are thriving, they’re still susceptible. East Hampton, which has almost 150 American elms, has lost a dozen in the last two years despite an ongoing disease prevention program.

Natural history: Elm wood has been used for the manufacture of wagons, wheel hubs, and tool handles. The Iroquois used elm bark to make canoes which were sturdier than those made from birch.

American history: Our most famous elm was a Boston tree that grew near the Common at Washington and Essex streets. Planted in 1646, the tree became a rallying site for disgruntled colonists enraged by the Stamp Act and other indignities imposed by the British. In 1765, a copper sign designated the elm “Tree of Liberty” and soon after other towns in the Northeast and South named their own liberty trees. When war broke out in 1775, Thomas Paine immortalized the tree in a poem. Later that year British soldiers and loyalists cut down the Boston tree, leaving a stump that was for years celebrated as the “Liberty Stump.” Today, the tree is honored by a bronze plaque on Boylston Street and a large tablet on a Washington Street building.

Comeback tree: In recent decades, arboretums and horticulture extensions have been creating hybrids between American, Asian, and European elms as well as selecting American elms that show resistance to Dutch elm and other diseases. One selection, named ‘American Liberty,’ honors the Boston tree. The Garden Club of Shelter Island planted an ‘American Liberty’ elm on the Youth Center grounds several years ago. If you’re interested in planting an American elm, I advise doing some research as there are many cultivars and hybrids available that show various degrees of resistance. Hopefully, stately elms will once again line the main streets of towns and cities across America.