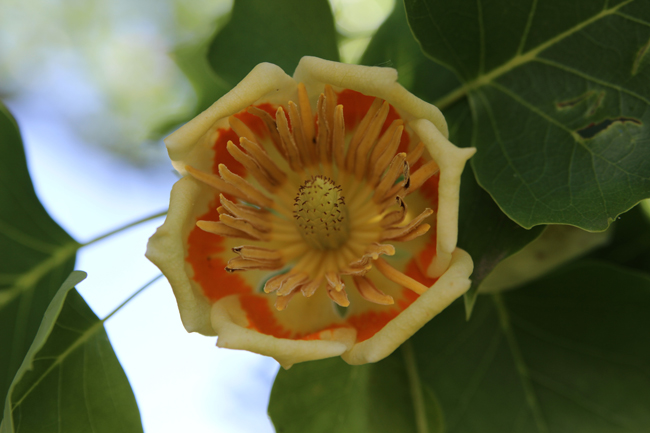 Locations: A large, old tuliptree grows next to a Sycamore on the Havens House grounds. On Ram Island, a handsome specimen, donated by the Tuthill Drive Neighbors, guards the entrance to Tuthill Drive. Three other trees — one between Chase Bank and Justice Hall, a second on Manhanset Road near Cobbetts, and a third on Burro Hall Lane across from the Recycling Center — were planted by Friends of Trees.

Tree stats: With leaves as distinctive as a Matisse cutout, our native tuliptree is easy to identify. Ditto the gorgeous, orange and cream tulip-shaped flowers that bloom in early to mid June. The Havens House tree, with its upper branches decorated with hundreds of flowers, is a thrilling sight. The flowers are followed by cone-like structures comprised of winged seeds called samaras that whirl off the trees in the fall and winter. Tuliptrees range in the Northeast from Massachusetts to Georgia and from Illinois down to Arkansas. They’re among the tallest trees in the Northeast, historically reaching more than 200 feet. As specimen or landscape trees, they’re neatly pyramidal in youth becoming more open as they age.

The tallest: A tree in Nassau County’s Shu Swamp Nature Preserve was once reported to be 169 feet tall. The tree’s height has since been corrected to be a still-impressive 154 feet. The tallest tuliptree in New York State, at 158.9 feet,  thrives in an old-growth forest in Zoar Valley in western New York.

Natural history: The nectar-rich flowers are pollinated by bees, beetles, and flies and are attractive to hummingbirds and orioles. Tuliptree honey is considered a special treat. According to a Washington Post article, “a 20-foot tree can produce eight pounds of nectar, which bees are able to convert into four pounds of dark amber honey.” Native Americans harvested the bark and seeds for medicinal purposes and made dugout canoes from the buoyant trunks. The Lenape name for tuliptree was muxulhemenshior, meaning “tree from which canoes are made.”

American History: The tuliptree’s soft, pliable wood has long been favored for furniture and construction. George Washington, who admired the tree for its shapely beauty, planted one at Mount Vernon in 1785 that would eventually be declared the site’s official Bicentennial tree. The tuliptree is the state tree of Indiana, Kentucky, and Tennessee.

Nectar of the gods: If you’re lucky to find flowers on reachable branches you can sample tuliptree nectar by tilting the flower like a teacup and licking the liquid on the inner sides of the petals. Just leave enough for the bees and birds. They need it more than we do.