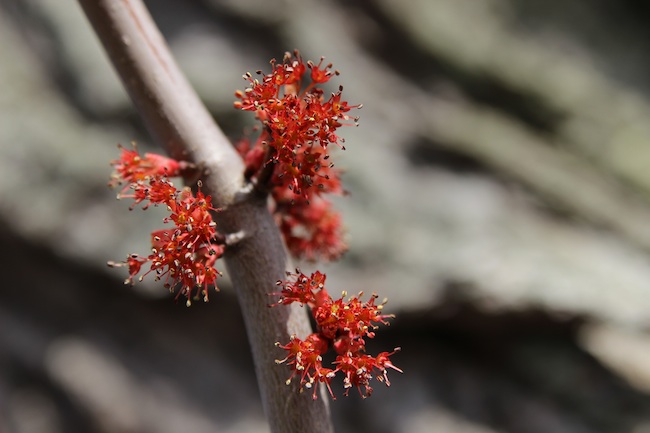 Locations: A large red maple has survived for years in front of the Chase Bank despite the fact that its roots are surrounded by concrete. Red maples can be seen along Menantic Road by Bowditch and Midway Road. In 2013, Friends of Trees planted red maple hybrids along both sides of Cobbetts Lane.

A tree for all seasons: As one of America’s most popular shade trees, the red maple puts on four-season show. In March and early April, jewel-like ruby flowers cover the branches. (On a sunny day, walk around the Chase tree and see how they glisten.) In June and July, winged seeds called samaras fly entrancingly through the air like whirligigs. The tree’s brilliant fall foliage is a hard-to-miss knockout and in winter red leaf buds provide subtle color.

Tree stats: The native red maple thrives in damp areas (thus its other common name, swamp maple) as well as in drier or rockier soil. Because of its wide range—from Canada down to Florida and west to Texas, Minnesota, and Oklahoma — red maple can exhibit pronounced genetic variations. According to Michael Dirr’s Hardy Trees and Shrubs, a Florida red maple is dissimilar from one in Maine. “Leaf shape, degree of leaf retention, fall color, and cold hardiness are distinctly different. A red maple from Florida will die in Maine, and vice versa.” The tree usually grows to 60 feet high and lives for 150 years. Numerous cultivars and hybrids with varying widths and color are commercially available. The hybrid ‘Armstrong,’ planted at Cobbetts Lane by Friends of Trees, remains relatively narrow, making it a perfect choice near telephone wires or in small yards.

The tallest: The current champ is a 141-foot-tall specimen in Tennessee’s Great Smoky Mountain National Park.

Natural history: Red maple can be tapped for sap though it provides only half that of the sugar maple. Native Americans utilized the tree’s bark as an eyewash and cure for hives and muscle pain. Red Maple wood is used for furniture, cabinets, and veneer. The bark was once used to make inks and dyes. The early spring flowers are wind and insect pollinated, and are an important source of food for bees. I have observed Island squirrels feasting on the seeds.

Rhapsody in red and yellow: Red maple’s fall colors inspired Henry David Thoreau to write, “How beautiful, when a whole tree is like one great scarlet fruit full of ripe juices, every leaf, from lowest limb to topmost spire, all aglow, especially if you look toward the sun! What more remarkable object can there be in the landscape?” Amen!