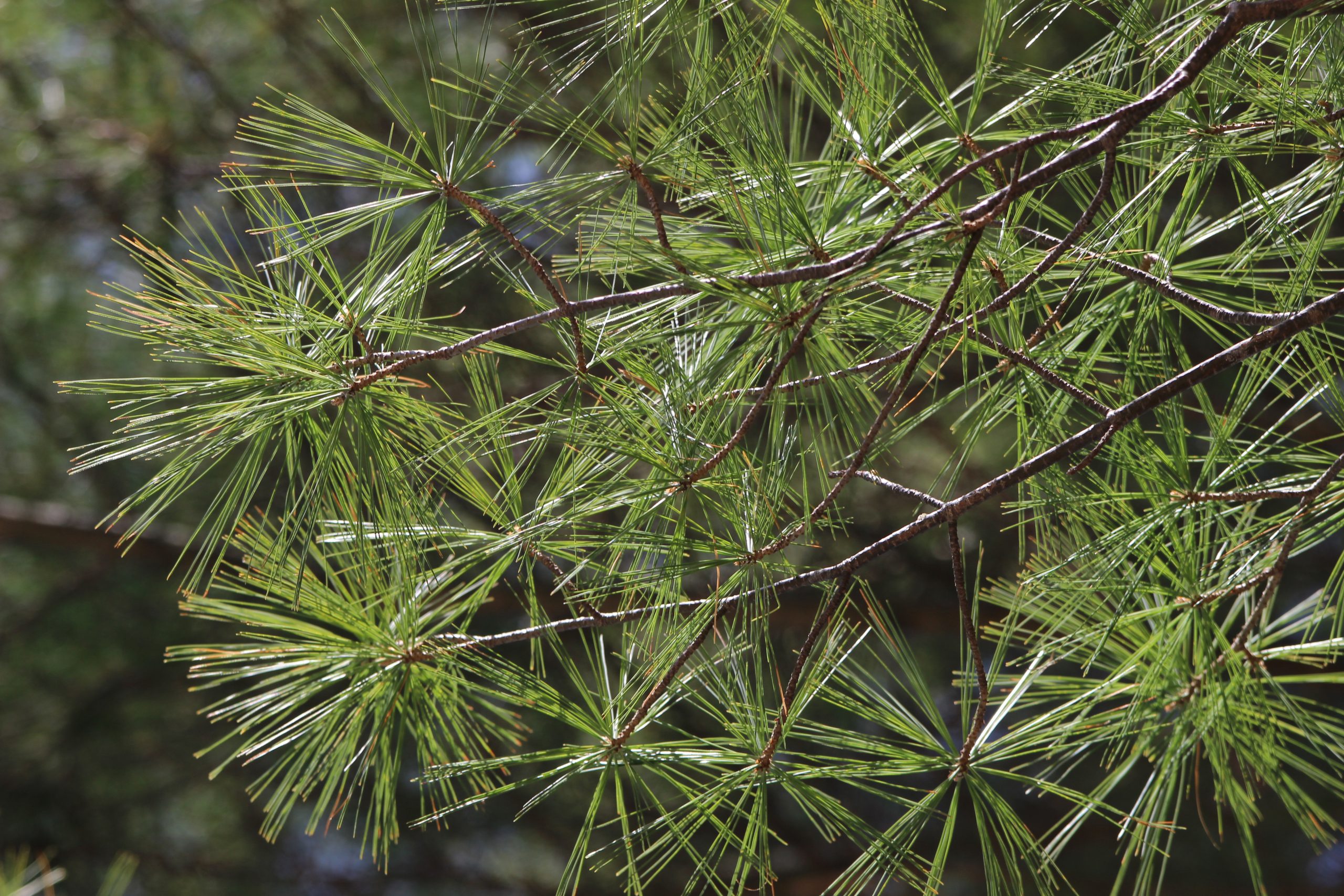 Locations: Three white pines tower over the Library. You can also see them on Winthrop Road, on the right, as you approach the Gardiner’s Creek bridge. They are abundant on the Sylvester Manor grounds and a large specimen stands out in Sachem’s Woods. Other white pines are scattered throughout the Island.

Monarch of the forest: White pine was once one the most plentiful conifers in the Northeast. In his book, The Trees in My Forest, naturalist Bernd Heinrich writes, “When the giant pines bloomed, wind swept the yellow pollen over the sea where superstitious sailors presumed it was raining brimstone.”

Tree stats: The native white pine can grow 200 feet tall with a 20 to 40 foot spread. It ranges from Canada down to northern Georgia and west to Minnesota, and can live for 400 years. White pine is the state tree of Michigan and Maine and it makes a good landscape tree in rural and urban areas, presuming you have the room.

The tallest: The “Longfellow Pine” in Pennsylvania stands 184.5 feet, making it the tallest tree in the Northeast. It’s estimated to be 250 to 350 years old.

Natural history: Native Americans favored white pine resin for waterproofing boats and baskets; the Chippewa reportedly used it to treat infections and gangrene. White pine bark and tar are still used today for medicinal purposes. The sap can also be made into turpentine. Bald eagles build nests in the trees and the 3 to 10 inch cones contain seeds that are consumed by birds and mammals.

American history: White pine has long been valued for home and furniture construction, cabinetry, and crafts. The tree was also once prized for masts, particularly by Great Britain, because it grows tall and straight. After her own forests were depleted, Great Britain turned to the virgin forests of America in the 17th century in order to maintain and expand her fleet and retain naval dominance. All white pines near navigable water with a diameter of 24 inches at the base were considered property of the Crown. So-called “mast” trees were marked with a blaze know as “The King’s Broad Arrow.” This decree meant that colonists were prohibited from harvesting trees on their own property without paying for a license. A second law shrank the diameter to 12 inches. Unsurprisingly, colonists in New England rebelled in several skirmishes that may have been a factor in the start of the American Revolution.

Thoreau’s rhapsody: In one of his journals Henry David Thoreau wrote, “Walked through that beautiful soft white pine grove on the west of the road in John Flint’s pasture … Great pines two or more feet in diameter branch sometimes within two feet of the ground on each side, sending out large horizontal branches on which you can sit. Like great harps on which the wind makes music. There is no finer tree.”

A stroll among the pines: On a warm winter day, I highly recommend spending some time under the Sylvester Manor pines. If there’s a slight breeze, stand still and listen to the wind blowing through the boughs. You’ll hear the same music Thoreau heard.