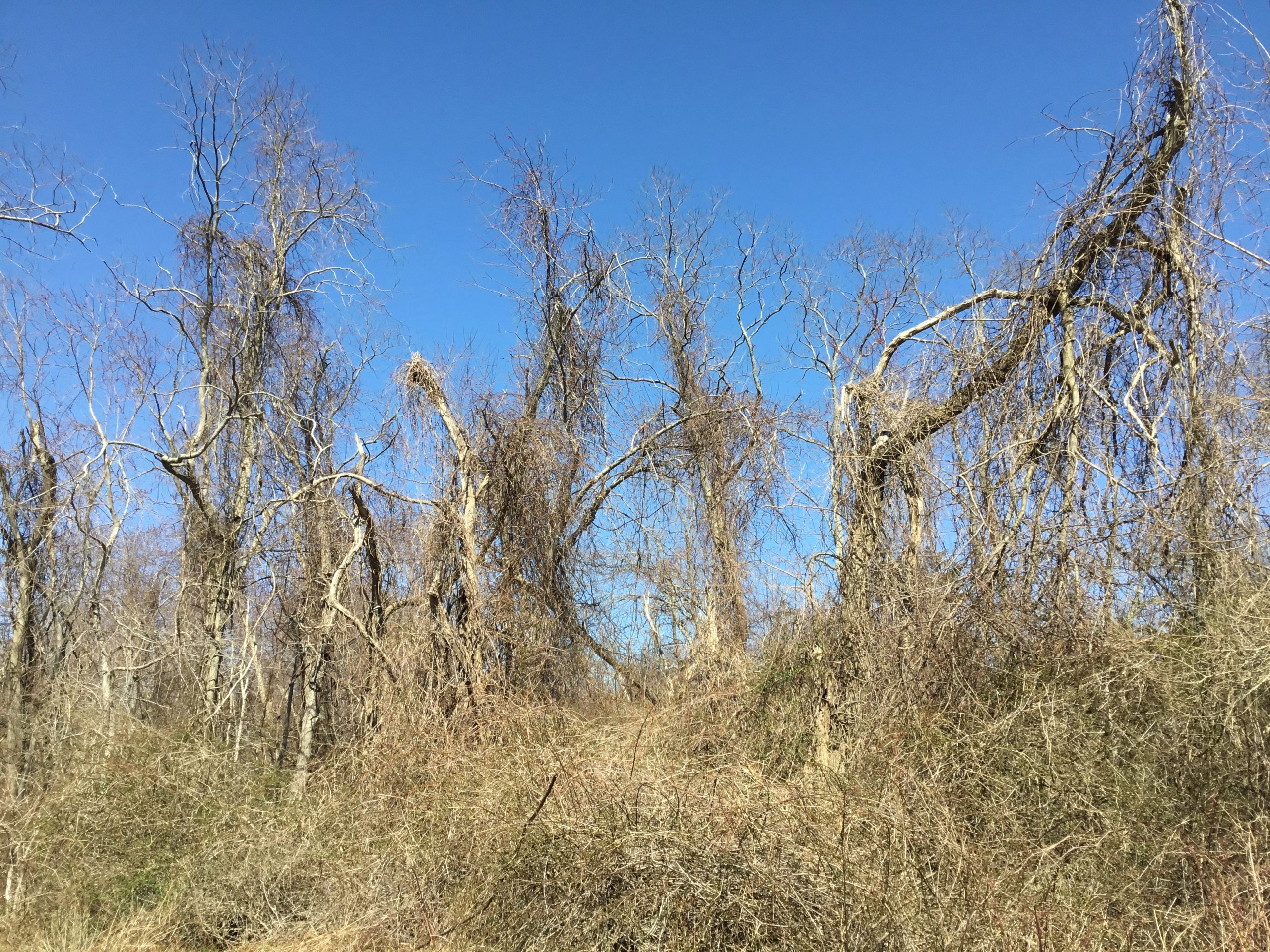 In a December post, I wrote about the beauty of deciduous trees in winter. The colder months also reveal something less beautiful: how vines severely impact our trees. Travel almost anywhere on the Island and you’ll see vines and trees comingling in a one-sided relationship that only benefits the aggressor.

Fast growing and vigorous, vines can easily overwhelm trees, limiting photosynthesis, strangling and crippling branches, and increasing vulnerability in storms. Invasive vines thrive on public and private property. For some homeowners, they may present an easy, natural barrier between neighbors or roads, but the damage to the trees can be devastating.

According to Shelter Island arborist Fred Hyatt, the worst culprits are mostly non-native species such as Asiatic bittersweet, Japanese honeysuckle, multiflora rose, porcelain berry, Chinese wisteria, and mile-a-minute, a fast-growing annual. On the more positive side, Edwina von Gal, a landscape designer and founder of Perfect Earth Project, says, “Good vines, like the native Virgina creeper, add a layer of food and shelter without harming the tree.” But even natives don’t always behave. Ms. Von Gal adds that “Wild grape is most often native and is great for wildlife, but it can get out of control and smother trees.” Catbrier, another native, can reach and constrict a tree’s lower branches.

There are a number of reasons why invasive vines are proliferating. Ms. Von Gal believes “The increasing fragmentation of our landscapes has tilted the balance to the advantage of the vines.” She also cites abandoned farmland as a breeding ground as well as the introduction of exotics in the nursery trade. One often sees vines in tandem with the ubiquitous black locust, a weedy species that flourishes in untended open areas.

And if it seems the vines are winning, you would be correct. Dr. Andrew Senesac, Weed Science Specialist at the Suffolk County Cornell Cooperative, says, “The problem of invasive species has absolutely become worse in the past 20 to 25 years. Invasive vines and invasives in general are the most visible manifestation of degraded ecosystems that are less resilient and unable to repel them.” Dr. Senesac also thinks climate change and the trend away from controlled fires are contributors. “Fire suppression in some cases is allowing diseased and insect riddled trees to remain when they would otherwise be culled by a controlled fire. This weakens the population in general and allows niches to open up for invasive species.”

While tackling vines can be a daunting task, control is possible with pruning tools and persistence. Mr. Hyatt and Ms. Von Gal recommend cutting them at the ground and six feet or higher. Ms. Von Gal also removes offending roots or repeatedly mows over them. As the dead vines decay in the trees, they either fall off naturally or can be pulled. Biocontrol is another potential weapon. Since 2004, a weevil that feeds exclusively on mile-a-minute has been released in several states and is showing promise in suppressing the vine.

In the meantime, until more magic bullets appear, hack away.