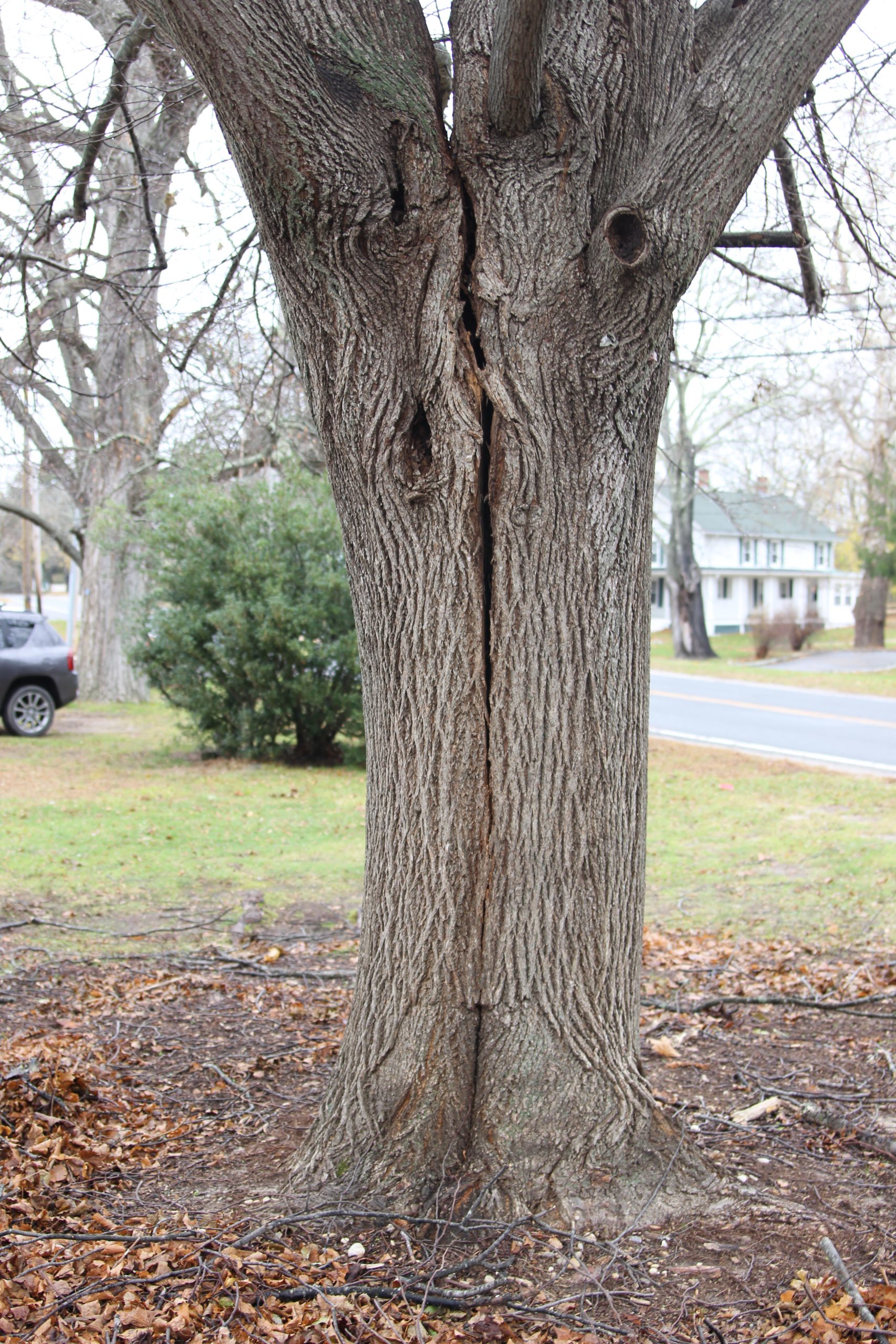 A couple of years ago, a friend visiting Shelter Island for the first time remarked about the abundance of our roadside trees. And it’s true. Ride a bike or walk the beginning of Nostrand Parkway or the Manhansett Road entrance to Dering Harbor and you’ll experience the enchantment of the dense, overarching branches. We’re so accustomed to our trees, that it’s a shock when they have to be taken down.

According to Island arborist Fred Hyatt, there are numerous reasons trees decline and die.

We’re losing or have lost Norway maples along Nostrand, and Menantic and Burns roads because many were planted at the same time and they’re now aging out. (I’ve been told this species was planted after the 1938 hurricane.) Maples are prone to root girdling, which potentially leads to rot, as does pruning branches too close to the trunk. Trees with co-dominant stems can eventually split apart as they grow and gain heft (see above photo).   Poor branching structure also makes them more vulnerable in windstorms. Other perils include insensitive pruning — any tree under a wire — lightning, and incorrect practices such as planting trees too deep or volcano mulching. The latter involves creating a mountain of mulch or soil around the base of a tree which encourages above-ground roots, rot, and instability.

Oyster Bay horticulturalist Richard Weir III, who looks after street trees in Plandome Village and neighboring municipalities, sees declining Norway maples as well as lindens and other species with intractable structural issues. As here, trees were stressed by this summer’s extreme heat, drought, and salt spray from Tropical Storm Isaias. Mr. Weir also mourns the loss of decades-old ash trees, an uncommon species on Shelter Island, decimated on Long Island by viral and bacterial disorders and elsewhere by the emerald ash borer.

In the Pine Barrens and South Fork, the native southern pine beetle has migrated north and is impacting Long Island’s pitch pines. The spotted lanternfly, first discovered in Pennsylvania in 2014 and now spreading outward, feeds on a number of tree species as well as grapevines. And then there’s climate change, which is making our winters and summers warmer as well as altering rainfall patterns.

So, after all this bad news, what’s the solution? For starters, plant trees. The town’s Highway Department has been replacing and adding roadside trees for several decades, often in collaboration with Friends of Trees. Several years ago, the town planted 11 zelkovas on the edge of Dickerson Park and Friends of Trees installed a dozen tuliptrees along Burns Road. In both areas, the new trees were placed away from the wires. When the Norway maples were removed at Menantic, the zelkovas were poised to take their place. The same will happen with the Burns trees. Recently, the Heights inaugurated a long-term tree replacement plan, a concept that can be duplicated by other Island associations and neighborhoods.

Homeowners can do their part by cherishing trees on their property such as our native oaks and hickories, unless they’re diseased, dying, or pose a danger. They should also invest in regular tree maintenance. Both Mr. Hyatt and Mr. Weir emphasize that, when planting new trees, it’s important to select appropriate species for the desired site and that they’re healthy, structurally sound specimens. And, as temperatures rise, we have to consider what species will thrive 100 to 150 years from now. (Sugar maples, alas, will not.) Planning for the future will require research and care, but the effort will repay us and our descendants in invaluable ways.